The Queen of Charts: Sharing One Way to Plan a Story 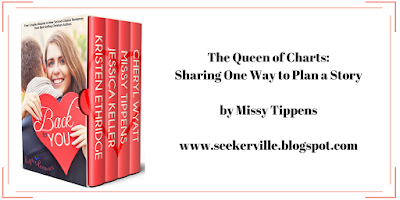 Let me reintroduce myself. I’m Missy, the Queen of Charts. I love a good planning chart and have a whole folder full of them on my hard drive to prove it. Because I learn best by seeing examples, I’ve shared some examples of my files in previous posts, hoping they might be a help to our readers. Here are links to two of those posts:

Today, I wanted to share another GMC chart. FYI: GMC is taken from the book GMC: Goal, Motivation and Conflict by Debra Dixon. I also modified my chart after using Carolyn Greene's Magic Conflict Chart from her out-of-print Prescription for Plotting notebook (she said will have a new edition coming later this year!). In addition, I've added some brainstorming notes that I made after reading The Story Equation by Susan May Warren and also hearing her present workshops at conferences.

I used these charts for my recent release, “Her Valentine Reunion,” part of the mulit-author collection, BackTo You.

In these examples, I’ll be copying and pasting directly from my planning notebook file (you can even see when I had a gem of an idea :)). Sometimes the story doesn’t end up exactly as planned, but for the most part, this one did.

You’ll see that for each character, I plan the following:
External goal, motivation and conflict (EG, EM, EC).
Internal need (what they truly need), goal (possibly misguided), motivation, conflict (IN, IG, IM, IC). Plus, something to consider.

GMC Chart for Her Valentine Reunion

Victor
EG: Go to High Hope/Dahlia (changed town name) to buy a golf course or invest in a struggling country club
EM: To look at establishing himself in High Hope/Dahlia and supporting the community.
EC: His ex-girlfriend, whom he did wrong and who wants him to stay away from her, works at the place he wants to buy—and hopes to take over the business when her uncle retires.

IN: to belong
IG: to earn forgiveness by being a better person (atonement/sense of duty toward hometown)
IM: he’s been aloof and superficial to protect himself in the past but has had an epiphany; he’s made peace with his newly discovered cousin and wants to have that relationship (but needs to change to do so; his almost-fiancée said he needs to accept people the way they are)
IC: it seems impossible to overcome his reputation and no one seems willing to forgive.
Consider: You can’t earn love and acceptance. It’s a two-way street, and you must first risk loving others.

Abbie
EG: Move back to her roots and make a happy, single life for herself near family and friends. Also making her place in uncle’s business so she can maybe take it over someday (a nice living for her single self).
EM: Hearing about the mistake Victor made being away from his grandmother before she died.
EC: Victor shows up, and he’s talking about buying the place she works—the place she wants to keep in the family and take over when her uncle retires

IN: Security/loyalty
IG: be independent and follow God’s plan for her life, even if it’s not what she always envisioned
IM: She’s been rejected/used in the past and doesn’t trust others easily
IC: It’s hard to be strong when Victor is around, reminding her of past hopes and dreams
Consider: If you try to be independent and not acknowledge the truth of your desires, you’ll never get what you need. 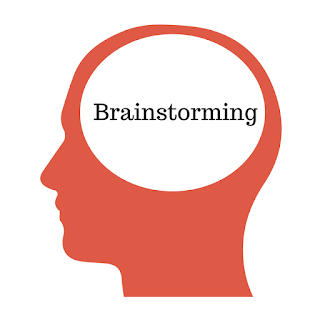 Victor
Wound: parents were not involved in his life. They were always busy with their own jobs and didn’t prioritize him, their only child. Praised him when he was successful, so he felt he could earn their attention. Grandmother was only one who showed unconditional love (and he ultimately let her down). Even his job success never seemed to impress his parents. With grandma dead now, he feels adrift—except for the tenuous relationship with Hardy. It’s a life-line.

Lie: (child) I must not be very lovable, so I need to be really good at something to earn attention and love.
Lie: (adult) People want to associate with me when I’m successful. That’s power to have them want my attention. I like my ability to give them things. If I lose my successful business, I am nothing.

Biggest fear: Everything I have crashing down (failure at business). Because that would mean loss of power, and thus, loss of worth.

IDEA!
To stay in High Hope/Dahlia he’ll have to sell his business. So buying the country club would be his way to stay in High Hope and be near family, which he dreams of having (and belonging). But to buy it would be to go against the one thing Abbie wants (to keep it in her family and take over for her uncle someday).

Abbie:
After he treated her so badly in college (Victor hid fact he needed to succeed more than he needed her), she felt used. Felt like she wasn’t worthy of love. Felt less than. Took a big hit to her confidence. Took a long time to get over that. Men she dated didn’t help. She had to do it on her own and through friends and family.

Her biggest fear (potential): 1. being found lacking    **2. Being used/taken advantage of or made a fool of
I think I like #2 better. Rather than be used or made a fool of again, she’d rather be single. Not so risky. So feeling God wants her to be single is less risky than having to trust Victor again.

Wound: Victor ignoring her and keeping her out of his life even while supposedly dating (because she didn’t have/offer anything to advance his goals).

Lie: I’m safer being alone, not depending on anyone else for my happiness. Nothing and no one is worth risking having your love thrown back in your face.

So that’s a peek inside my plotter’s brain. It’s a great way for me to think through my story and to make sure I have some decent backstory before I start writing.

Often, the next step is to think of scene ideas for each block on my GMC chart. I think of scenes that will show, for example, my heroine’s external goal, or my hero’s internal motivation. This is also a great way to make sure I’m not just telling with a backstory dump. Once I have a lot of scene ideas jotted down, I try to put them in some type of chronological order that makes sense and seems to progress in rising action. This won’t be all the scenes in the story. But it’s a nice skeleton to start with. And of course, that changes as I move forward in the writing—because the story sometimes goes in surprising directions.

I hope y’all found this helpful! I’d love to hear whether you use any sort of GMC chart. How do you plan your characters?

Giveaway! I’d like to offer to look at your GMC chart or, if you don’t work that way, to look at 1-2 pages of your brainstorming notes. I’ll give feedback or offer additional ideas. Just let me know in the comments if you’d like to be entered.

So, are you ready to read Victor and Abbie's story? :) 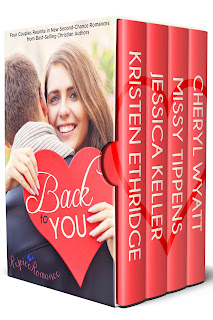 Join some of today's best-selling Christian Romance authors as they introduce you to four new couples who reunite for a second-chance at romance. This inspirational romance collection from Love Inspired authors Cheryl Wyatt, Missy Tippens, Jessica Keller, and Kristen Ethridge will warm your heart and each quick, satisfying read will keep you in the spirit of Valentine's Day and holiday romance all year long with stories of true love and happily-ever-after.

Also! Don’t forget to pre-order Cowboys of Summer! Next month I’m going to talk a little about how this city girl wrote her first cowboy story. :) 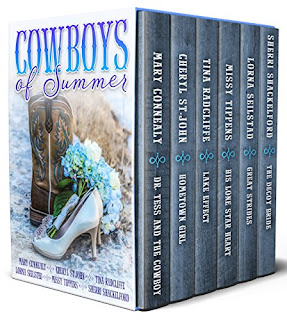 As the summer weather sizzles, relax by the pool with stirring tales of handsome cowboys and the spirited ladies who wrangle them into romance. Six of Christian fiction's most beloved authors join forces to bring you a collection of humorous, romantic and heartfelt novellas set against the sultry heat of summer.

***************
After more than 10 years of pursuing her dream of publication, Missy Tippens, a pastor’s wife and mom of three from near Atlanta, Georgia, made her first sale to Harlequin Love Inspired in 2007. Her books have since been nominated for the Booksellers Best, Holt Medallion, ACFW Carol Award, Gayle Wilson Award of Excellence, Maggie Award, Beacon Contest, RT Reviewer’s Choice Award, and the Romance Writers of America RITA® Award. Visit Missy at www.missytippens.com, https://twitter.com/MissyTippens and http://www.facebook.com/missy.tippens.readers.