RUE the Day We Don’t Respect Our Readers

Rue the day we don’t respect our readers. And by RUE, I mean R.U.E. 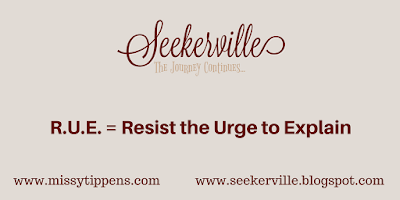 RUE is a note I have often seen in the margins of my critiqued manuscripts. I used to be a part of a critique group that met weekly in person. We each had our own gifts to contribute. Lindi Peterson had a knack for looking at the overall story arc. Meg Moseley was known for helping figure out plot problems. And Maureen Hardegree, our English major in the group, was known for helping us with grammar and mechanics. She was the one who often had to write RUE in my margins. I can still picture it in purple or pink ink. :)

I tended to explain things I had already shown, and still fall into that trap. This problem is the equivalent of knocking the reader over the head with something they’ve probably already gotten. Don’t you roll your eyes when you read something like this:

Example: The man grabbed Pam’s arm. She wrenched herself from his grasp and bolted away, cries for help ripping from her throat. She was terrified.

Reader response: Well, duh. Yes, of course she was terrified. I knew that the instant the man grabbed her arm. And if I hadn’t gotten a clue at that point, then I most certainly knew when she ran away screaming.

The fix: This is a matter of show vs tell. In that example, I both showed, and then told immediately after. (Like I said above, it’s like hitting them over the head with a club just to make sure they got it.) In this example, just delete the second, telling sentence. Let the first one shine and do its job.

Let’s not insult our readers. Let’s trust them. I know as a reader, I really appreciate subtlety. I get a sort of thrill when I catch on to something quickly—like I’m an insider. I love being so in tune with a character that I understand a funny comment or chuckle at a thought (and gleefully think to myself that I’m really quick on the uptake because I got it). Well, in reality, I’ve been given that experience by a skillful author who pulled me into her/his world and made me feel like a special participant. I’m probably not as clever as I thought. LOL But still, it’s a great feeling! (Thank you, skillful authors who have given me that feeling of being in your characters’ inner circle!)

That inclusiveness, that bond with readers should be our goal. 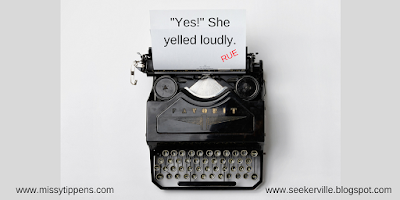 We need to R.U.E. in dialogue as well as in our scenes.

Example: Mindy rolled her eyes and threw the book against the wall. “Okay, I get it already. I got it the third time you told me,” she said, frustrated at the author for beating her over the head with the information for the third time.

[Note: I had too much fun writing that example!!! LOL]

The fix: Delete that whole last part, so that it reads:
Mindy rolled her eyes and threw the book against the wall. “Okay, I get it already. I got it the third time you told me.”

Her actions are obviously from frustration. And you don’t even need the dialogue tag. The rolling eyes and throwing the book serve as an action tag.

We need to R.U.E. in the descriptive details and dialogue tags we choose to use.

Example: Ruthy opened the heavy front door and stepped into the living room.

“There you are. Did you finish feeding the animals?” Beth asked.

Ruthy stomped the icy cold snow off her well-worn work boots, marched across the plush new cream-colored carpet, and then picked up the fireplace poker with her hand. She opened the door to the brand new wood burning stove and gave the embers a quick poke. The flames roared to life in sparks of red and yellow, heating up her small frozen hands—hands that looked so much like her grandmother’s she sometimes wondered if she was more like her than she thought. Then she turned to answer her daughter’s question. “Yes. All done. Is dinner ready? I’m starving!” she said excitedly just as her stomach growled.

Reader response: Huh? What was the daughter’s question again??
Critique partner response (as her head spins): I think maybe you got a little carried away trying to set the scene. What’s important here?

The fix: Okay, this example was loaded! LOL
--You do want to set the scene. And details can be nice. But if someone just asked a question, then you can’t go on for too long before answering (unless you’re doing that intentionally to show character hesitation). You don’t want the reader to have to go back to re-read to remember the question.

--You also don’t need to tell EVERY. LITTLE. DETAIL. Not of someone walking across the room and stoking a fireplace! (Oh, my, but I’ve been so guilty of this!) Unless the plush carpet and new fireplace are important (had the character just won the lottery or received an inheritance?), you probably don’t need all those details either. Choose details carefully. Use them to reveal character. Use them to show contrast.

--Also, the way this character goes on without answering makes the reader think something is wrong. If it’s not, then you’ve built up false expectation. And again, when you focus so on details, you make the reader think they’re important for some reason. R.U.E. also includes not telling or showing more than you need to tell or show. So let me take a stab at a fix for this example assuming Ruthy has no problems with Beth:

Ruthy opened the heavy front door and stepped into the living room.

“There you are. Did you finish feeding the animals?” Beth asked.

“Yes. All done.” Ruthy stomped the icy snow off her well-worn work boots and hurried to the wood burning stove. (I kept this detail because it’s good characterization. We know our Ruthy is a hard worker!) A quick poke, and the flames roared to life, heating up her hands—hands that looked so much like her grandmother’s she sometimes wondered if she was more like her than she thought. (I would leave this for foreshadowing, but only if it will come into play later.) “Is dinner ready?” she asked just as her stomach growled.

I also considered leaving the plush carpet to show contrast with the dirty work boots. But I didn’t think it was needed in this scene. I think it could be more powerful to use that contrast in a scene where maybe the character is uncomfortable. And this character is not uncomfortable in her own home. Now, take her and her wet work boots and plop her in the parlor of a mansion, and I might like to use that plush carpet detail.

I hope you had fun with these examples. While writing this post, I was re-reading some chapters in Self-Editing for Fiction Writers by Browne and King. They include a section on R.U.E. in the chapter on Show and Tell. They point out to always check your manuscript for emotion words that are outside of dialogue. I think that’s a great check to do. I know when Janet critiques for me, she often finds those places.

Granted, sometimes we choose to use narrative summary (telling). So don’t feel like you have to delete every example. Just make sure you’ve left them there for a purpose (for example pacing or summarizing something that doesn’t deserve its own scene). And make sure you're not telling something twice!

I’ve found that in first drafts, when I’m moving very quickly, I’ll make the mistake of repeating myself with telling right after showing. I think it comes from not thinking too much as I'm blooping the words out on the page. That's to be expected on a rough draft. But when those mistakes remain after polishing, I think it comes from lack of confidence.

I'd love to hear your experience. As readers, have you felt that wonderful bond with characters so that you felt like an insider? Have you also experienced that feeling of being beaten over the head by a story? Let's chat! 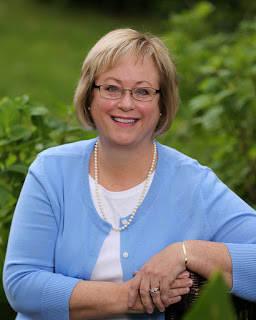 After more than 10 years of pursuing her dream of publication, Missy Tippens, a pastor’s wife and mom of three from near Atlanta, Georgia, made her first sale to Harlequin Love Inspired in 2007. Her books have since been nominated for the Booksellers Best, Holt Medallion, ACFW Carol Award, Gayle Wilson Award of Excellence, Maggie Award, Beacon Contest, RT Reviewer’s Choice Award, and the Romance Writers of America RITA® Award. Visit Missy at www.missytippens.com, https://twitter.com/MissyTippensand http://www.facebook.com/missy.tippens.readers.