I've got a new book coming in March--I'm launching it here with a giveaway! 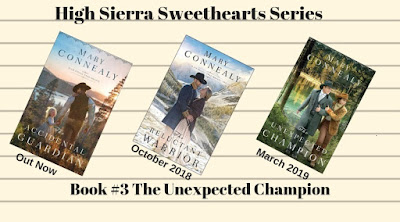 I want to talk today about developing interesting characters. 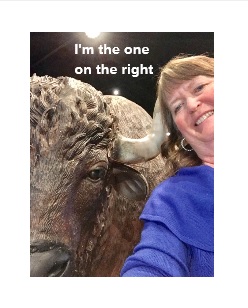 There are those that say I myself am an interesting character, (or maybe they just "she's a character?") But that's a different blog post!

Sometimes it's a struggle to get characters to come to life.


And it's hard to explain what I mean about that, but I'll try.

I smile when I think about The Unexpected Champion.

I like writing tough, feisty heroines. I do it so much that sometimes I FORCE myself to not make my heroines tough, just to try and not be boring.

In The Accidental Guardian and The Reluctant Warrior, Deb and Gwen, the heroines, weren't necessarily tough.

They were strong, hardworking women, but they weren't frontier women. They had a lot to learn. Their toughness was inside, mental toughness. A knack for taking what life threw at them and dealing with it as best they could. And learning everything they could.

In book #3 The Unexpected Champion, my heroine is TOUGH.

Penny Scott has been living on the frontier for two years, working in a series of western forts, following her brother from post to post.

She knows the wilderness. She knows tracking. She can live off the land and, what's more, she likes it.

Give her a gun, a skinning knife and a little time and she'll take care of everything. She'll build you a house, clothe you, feed you and protect you.

And then she got lost. She has the knife, gun and time. So they stay alive. But where in the world are they? Where is a town? The mountainous wilderness is an endless series of hills and mountains, cliffs and valleys, all leading nowhere.

The fact that she gets kidnapped, is blindfolded, tossed in a wagon under a tarp, then is driven deep into the wilderness using twisting trails...and sometimes no trails, then, while escaping, gets chased over a cliff, down a river and through endless forests, capped off with a gully washer, lightning and thunder storm.

She is hopelessly lost. That's bad enough. But why'd she have to get kidnapped with a guy from the city who gets upset when he can't take a bath and put on clean clothes each morning?

I like my heroes to be tough guys, too.

In The Unexpected Champion I tried to create a character in the hero, John McCall, who was a fish out of water. When he's lost with a bossy female in the wilderness, he's no help, in fact, he's slowing her down.

And then he gets into his own world. Now who doesn't know how to swim?

Penny can't read tracks on the streets of the wide-open boomtown of Virginia City.

But John can. He turns out to be really tough once he gets into his own world.

Now Penny's the one who has to let someone else take charge. It doesn't come to her naturally, but she's smart enough to know John had to lead 'cuz she has no idea where she's going.

And, when they finally came staggering out of the wilderness after a week, it turns out Penny's brother mistakenly thought John had kidnapped her.

That's a little mix-up that almost gets John hung and, due to the twisted logic of a fire-and-brimstone...sheriff's WIFE, Penny has to choose between letting them hang him, or marrying him.

It's not a decision she makes all that easily.

So mostly, I tried to make each character ignorant--and I used that to build respect and finally LOVE between them.

John just shuts up and lets Penny give orders in the wilderness.

And neither of them are that happy about the wedding.

John still has a job to do, which is take Penny's nephew Ronnie home to his grandparents in the east.

If he tries that, Penny's gonna have to kill him. Which is a quick and easy way to get a divorce, if you don't end up being hung.

And Penny claimed a homestead and has a cabin to build and a herd of cattle to manage. John says, if she wants to live with her husband, he's a Pinkerton agent from Philadelphia.

And there's a mysterious killer on their trail who thinks they know too much about him to be allowed to live.

Except now, they're on his trail, too.

He's going to be sorry he didn't just let them go when they escaped him.

He's going to be sorry he kidnapped them to begin with.

Today I want to talk about YOUR current character. YOUR work in progress.

How do you make your characters come alive? Is it physical descriptions? Dialogue? Back story?

Tell me about your character. The one you're creating right now. And if you'd like to brainstorm ways to make them come to life, we'll talk about it.

Or if you're a  reader, then tell me about a character you're reading about right now. And tell me what brings a character to life for you.

The Unexpected Champion arrived...Bethany always sends me a copy hot off the presses and IT. IS HERE!!!

I'll be getting more copies in the next week or two.

Today, I'm giving away a signed copy of The Unexpected Champion.

Leave a comment to get your name in the drawing.