Using Humor to Bring Life in Your Fictional World

My main character, Madeline, was dying. The novel, The Crescent Stone, was told completely in her point of view, and to be honest, the constant reminders that she was having trouble breathing were dragging down the narrative. Her best friend, Jason Wu, brought some much needed comic relief, and my editor suggested I add him in as a point-of-view character. Suddenly the whole book felt lighter. It wasn’t just that we needed a break from the pain of Madeline’s experience, it’s that Jason was genuinely funny. Here are a few tips on how to bring more humor into your story.

Every comedian seems to do a bit about their family, about sitting next to strangers on the plane, or about politics. There’s something about someone standing on stage and saying something we’ve all thought that makes us feel included and makes us laugh. In my books, Jason Wu has taken a vow to never tell a lie. Not only that, but he also volunteers the truth whenever he gets a chance. He’s the sort of kid who gets on the school loudspeaker and points out the obvious toupee that the principal wears and then gets confused when he gets in trouble. One of my favorite bits in The Crescent Stone is when Jason asks something that you just don’t see mentioned much in fantasy novels: where do these people go to the bathroom? Other characters are baffled by his preoccupation with the magical plumbing, but it’s a pretty funny scene when he’s sitting on the floor, dropping stuff in the magic toilet and trying to figure out where it goes when he closes the lid.

There’s a reason so many of us love sitcoms. I was watching a situation comedy the other day where the irresponsible teenagers are being shown a priceless religious artifact being hosted by their Catholic high school, and I just knew they were going to accidentally break it. I like to throw my characters into the deep end. With Jason, I wanted to give him a comedy bit that had nothing to do with his truth telling, so I threw him into an unfamiliar culture where he was making hilarious (to the audience) mistakes, including accidentally going through a cultural ritual that leaves him with an entire desert tribe called the Kakri trying to ritually murder him for a year. We connect back to this moment again and again as Jason makes a run for it every time he sees a Kakri warrior for the rest of the novel.

In a YA fantasy series there are plenty of opportunities to point out the ridiculous and crazy things happening around your characters. Some novels are satisfied to have characters flying around on giant birds without comment, but there’s potential for a lot of humor there, too. What does it feel like to fly on a giant bird? Is it warm with all those feathers? What if Jason’s allergic to feathers? A giant bird obviously breaks the laws of physics, so maybe Jason’s going to talk about that. Winking at the audience to let them know that you know what’s happening is a little ridiculous is a lot of fun for everyone involved.

I love making my audience laugh with something that’s been hidden in plain sight all along. For instance, in The Heartwood Crown, I have a character named Hanali who is terrible at identifying Earth animals. He calls them all the wrong names. He keeps telling Jason there are no dragons in the Sunlit Lands, and it’s making Jason increasingly agitated because clearly Hanali thinks cats are called gryphons and hippogriffs are llamas. So when we finally discover that there’s a “dragon” waiting somewhere off in the northern reaches of a certain forest, we’re primed for the surprise reveal along with Jason.

There’s a unicorn in the Sunlit Lands named Delightful Glitter Lady (because of course that’s a real-life consequence of real-life unicorns—they will have beautifully complex names like that). There’s also a magical device that allows Jason to shrink or grow Dee by turning a certain dial. The only catch is that every time she shrinks, there’s a pebble somewhere that turns into a boulder. And every time she grows, that boulder turns into a pebble again. So of course in the midst of a pitched battle, Jason, who’s not exactly a warrior prince, has the bright idea of tossing a pebble to one of the terrifying enemy warriors. He picks up the dial, grins at his unicorn, and shrinks her to kitten size. It’s a beautiful moment that the readers are ready for and find both entertaining and funny.

One thing I love about humor in fiction is that the funny moments contrast with the tragic moments to make them even more meaningful. Goofy Jason is close friends with Madeline, and her descent into illness isn’t played for laughs at all. I like to have people laughing and crying in the same chapter if possible! 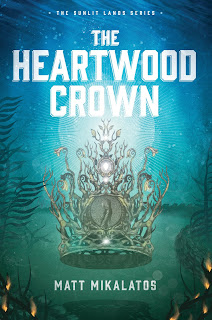 Matt and Tyndale House are graciously offering a copy of his new release "The Heartwood Crown" to one commenter! I know I'm anxious to read the whole series!

So let's talk about humor in fiction. Do you enjoy reading it? Do you love to write it?

And what do you think about Matt's comment: "I like to have people laughing and crying in the same chapter if possible!"

After destroying the Crescent Stone, Madeline returns home, bringing Shula and Yenil with her. As her health continues to deteriorate, Madeline feels the Sunlit Lands calling her back. Meanwhile, Jason, Darius, and the rest of the inhabitants of the Sunlit Lands fight for survival and freedom. The magic that fuels the land is failing, threatening to destroy them all. Will Madeline’s return save the land and its people? Matt’s signature humor and epic storytelling are once again on full display in The Heartwood Crown.

Matt Mikalatos is the author of ten books, the most recent of which is The Heartwood Crown, book two of a YA fantasy series. You can learn more at www.thesunlitlands.com.