Carrie here - I have the utmost privilege of welcoming 'the author formerly known as kaybee' to the blog today. That's right, Seekerville's own Kathleen D. Bailey (a faithful commenter under the handle 'kaybee') has just released her first novel, and we are thrilled at the chance to help her celebrate!


Michael once betrayed Caroline in the worst possible way.
Can she trust him to get her across the Oregon Trail?
Can he trust himself to accept her forgiveness and God’s? 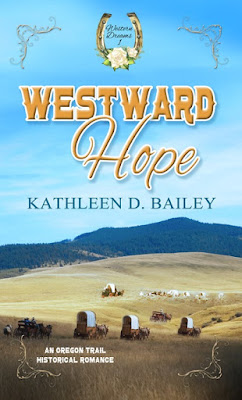 
Take it away, Kathleen!

For years, my father-in-law drove a vehicle which we famously referred to as the “Chinese Junk.” It was a 1960s station wagon that, with judicious replacing of parts, he had kept functional well into the 80s. He eventually got a better car for himself, but he kept the Chinese Junk as a spare and his children and extended family drove it when we were between vehicles or having our vehicles worked on. (We do not go to the kind of places that have loaner cars, sigh.) Toward the end of its life you had to connect two wires under the hood to start it, but there was no question in any of our minds that the Chinese Junk worked.

My father-in-law nickeled and dimed that car for years. The Junk gave up its particular ghost when the mechanics in the family couldn’t FIND parts, but even then it refused to die and it’s rusting somewhere in a secluded part of my brother-in-law’s property. Now that was a car. And also, probably by today’s standards, not legal.

You can nickel-and-dime a car, but only for so long. Trust me on this. Eventually even the Chinese Junk had to be retired, though family members still raid IT for parts.

But there are other areas of our lives where we can’t take the nickel-and-dime approach, and we shouldn’t.


I stood up with eagerness as the medical researcher came back into the room, but her expression told me I had nothing to be eager about. “You didn’t qualify for the depression study,” she told me. “The doctor said we need someone who’s actively depressed.”


She said she’d try to get me a check for the time I spent on the screening, and as I walked out to the reception area she patted me on the back. “Look at it this way, at least you’re not depressed.”

For several years my husband and I have done medical research trials to help with an ever-expanding budget and ever-shrinking paychecks. I had had my eye on this one for catching up on our property taxes. But as I started my car, I knew that God would provide for the taxes in His own way and His own time.

It wasn’t always that way.

We have struggled financially for most of our marriage, from Dave’s college days to the Great Recession, which never receded fast enough for me. I clipped coupons, looked for deals on everything, and found secondary ways to make money. When I had full-time jobs, I always freelanced around the side; and when I lost one of those jobs due to budget cuts, I never collected a dime of unemployment. At one point during the laid-off years, I had six different income streams. At once.

But they never did what I hoped they would.

I would plan on a certain check to come to take care of a certain need, and when it came, another, more urgent need nudged it out of the way. So I’d roll the need over to the next freelance check, bonus or medical trial compensation. And the “need” would get eaten up by something else, a still more urgent one.

There was never enough to go around, and my plans for what there was always fell through.

This financial patchwork quilt, with plenty of holes, extended into our sixties. When friends paid off their children’s student loans and their houses, I continued to scramble for freelance jobs. Sometimes I got them, sometimes I didn’t.

Until the day I was grousing about yet another need going unmet because another need had superseded it. And the Lord spoke to me. Not a burning bush thing, I’ve unfortunately never had those, but it was clear enough: “Kathy, you are never going to nickel-and-dime your way out of your financial problems. If you could, you would have done it by now.”

Was that what I had been doing? I’d thought it was Good Financial Planning.

And maybe it had been, but God had a bigger plan. A spreadsheet I couldn’t argue with. I still plan, but I’m a lot more flexible in allowing Him to meet our needs. Because He will. In His time and His way.

I asked myself what else I’d been approaching this way, or seeing other people dealing with in the nickel-and-dime way.


Could you nickel and dime a marriage? Could one go into that most intricate of human relationships with a checklist?

Only if one or more of the parties walked away with a broken heart. 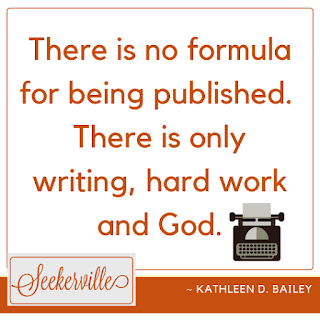 If Dave or I had had a checklist, we wouldn’t be here today. Not together, anyway. There is no earthly reason why we should be married, or even a couple. But God wanted it that way, and the three of us are greater than the sum of our parts.

In writing (yes, I knew we’d eventually get here), I held to a punch-list format for years and years. If I did everything right, whatever “everything” was at the time, I would snag THAT editor, THAT agent, or THAT door would open and I’d walk in and not look back. I schmoozed and slaved. Boxes were checked. Formulas got followed, disciplines observed. But formulas and checklists don’t always follow the patterns of an industry in flux. Because there aren’t any patterns. Houses close or merge, agents burn out, trends flow away from my genre.

There is no formula for being published. There is only writing, hard work and God.


Being “anxious for nothing”


But God wasn’t done with me even then, as He pointed out that we can’t nickel-and-dime our salvation, either.

I thought I’d mastered that one. Raised in a liturgical church, I’d looked for salvation through sacramental observances and good works for most of my childhood and teen years, and thrown that off in the tumult of the 60s. When the Lord found me, a drugged, directionless little hippie girl, I learned that the road back wasn’t paved with good works, and I joyously accepted salvation by faith.

But there was still a lot to learn, and as with my finances, the idea of doing it myself wouldn’t go away. When there was a need I tried to fill it, even when He had other plans. I was Doing and not necessarily Being.

Until I couldn’t. Age caught up with me, along with a demanding job, and I couldn’t necessarily Do. Who would Do if I Didn’t?

I could never be good enough, smart enough, “Christian” enough for God. And He knows that. He knew it when I was born, He knew it on that fateful Friday 2,000 years ago. But that’s never been what He wanted.

We can’t nickel-and-dime the way to heaven. But when faced with the sacrifice of everything He was in spite of everything we are, really, who would want to? Wouldn’t you rather be loved with an Everlasting Love than check off, or be checked off a punch list?

He wants me, and you, to Be first.

And He’ll take it from there. 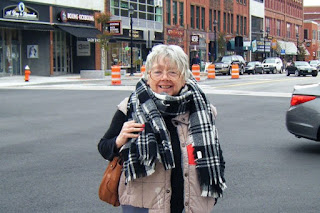 Kathleen Bailey, known locally as “Kaybee,” is a journalist and novelist with 40 years’ experience in the nonfiction, newspaper and inspirational fields. Born in 1951, she was a child in the 50s, a teen in the 60s, a young adult in the 70s and a young mom in the 80s. It’s been a turbulent, colorful time to grow up, and she’s enjoyed every minute of it and written about most of it.

She attended a mixture of public and parochial schools, graduating from the University of New Hampshire in 1974 with a bachelor’s degree in English Literature. She married the Rev. David W. Bailey in 1977, and they lived in Colorado, Wisconsin and Michigan before returning to their home state of New Hampshire. They are the parents of two adult daughters.

She has worked as both a staff and freelance journalist. She semi-retired in 2017, in order to devote herself to a growing interest in Christian fiction. She has won or finaled in several contests, including the 2018 American Christian Fiction Writers Genesis contest.

She blogs on other writers’ sites and on Twitter, Facebook and LinkedIn. She is involved in an active critiquing relationship with another author. A member of the American Christian Fiction Writers, she participates in continuing education, judges writing contests, and continues to enjoy the world of words.

Bailey “sailed off the island” Sept. 20 with the publication of her first novel, “Westward Hope,” by Pelican/White Rose Publishers. She is contracted for the second book in the series, “Settler’s Hope,” and also has a novella with minor characters from “Settler’s Hope” to be published in Pelican’s “Christmas Extravaganza.”

Bailey’s work includes both historical and contemporary fiction, with an underlying thread of men and women finding their way home, to Christ and each other.

What about you?
What's something that maybe you've been trying to nickel-and-dime in your writing or in life?

Comment for a chance to win an ebook of Westward Hope by Kathleen D. Bailey!