Hello everyone, Winnie Griggs here. Last weekend I attended the Readers & Ritas Reader Weekend in Dallas and wanted to share just a little bit of the fun we had with a few quick photos:

The weekend kicked off with a reader scavenger hunt on Friday afternoon. Unfortunately I forgot to get a picture of my table, but here is a photo of the spinner I used at my table to award the various little prizes I handed out. 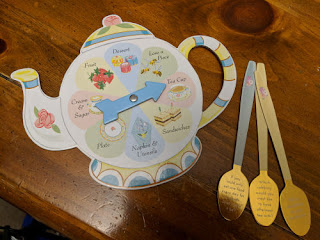 Next was an author bingo sponsored by me and four other author friends - Julia London, Angi Morgan, Sasha Summers and C.A.Szarek. These are always so fun, for both the authors and the readers. Here's a pic of the author team (some of us took the PJ party aspect more serious than others :) ) 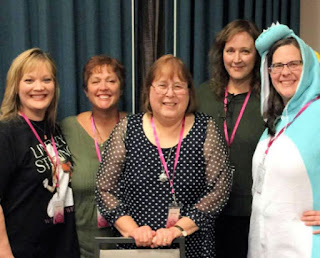 On Saturday I hosted a table for lunch. This year I chose Cool Chicks Read as my theme and I had a great time collecting and creating items that would fit. 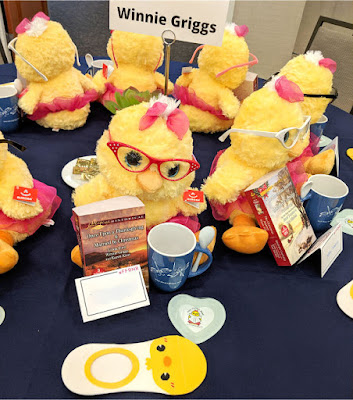 Then Saturday afternoon I was part of a panel titled I'm Holding Out For A Hero along with authors Bethany Turner, D B Reynolds and Tif Marcelo. I wasn't sure what to expect, but it turned out to be a competition with me and Tif paired off against D.B. and Bethany. We were given questions that required us to answer with either lists or drawings and then the attendees voted on whose responses they liked best. Suffice it to say there was a LOT of laughter at our responses. The session actually ended in a tie (or maybe the moderators just decided to cut it off there :)  ) 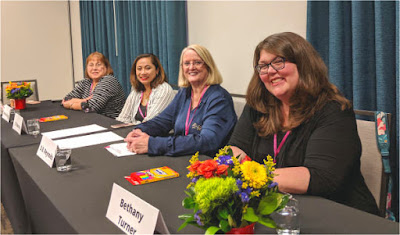 Then there was a booksigning where I got to sit next to my panel-mate, Tif Marceello. 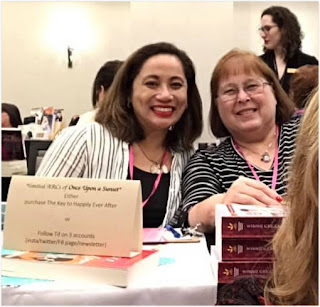 The day ended with supper where I got to sit at the table hosted by the always fun and fabulous C.A Szarek 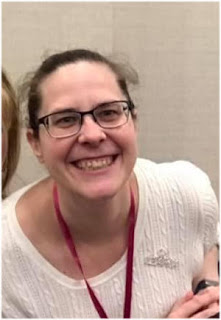 And now for the writing portion of this post, I thought I'd dust off a post I did here ten years ago on Transitions:

Transitions: Getting From Here To There

When writing your story, you don’t want to include a detailed account of every action taken by every character in your story, nor do you always want to tell the story linearly. Instead, a good writer will select those scenes that are not only of interest but that also progress the plot in some way. Which means, by necessity, gaps will occur: gaps in time, in movement from one location to another, in point of view, in scene focus.

Transitions are those small but oh-so-important words or phrases that help guide your reader across these story gaps smoothly and while still remaining grounded in your story. There are several techniques or devices that you can utilize to do this effectively. Some of them are:

The Direct Method or ‘Clean Break’- Simply tell the reader what change has taken place:

Mood - Use feelings, emotions, atmosphere to help convey the change:

The Five Senses - Use sound, sight, touch, taste and smell to bridge a story gap:

An Event - Use an ongoing, recent or anticipated event to unify your scenes:

A Character (whether human or otherwise) - Use the mention of a character to guide us through a story shift:

An Object - Use an object or activity to move from one scene to another without jarring the reader:

The Environment- Use weather, terrain, scenery, seasons to depict change:


These are just a sampling. There are, of course, other ways to handle transitions. Just keep in mind - your main goal in using transitions is to keep your reader grounded and oriented in the who, what, where, and when of your story without their having to reread passages to figure it out.

And now for some fun news. Just in time for Thanksgiving, my publisher has re-released my novella Home For Thanksgiving as part of their Love Inspired Classics program.  Leave a comment for a chance to win a signed copy 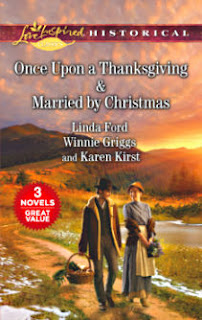 All that stands between Ruby Anne Tuggle and a fresh start is an escort to .

Rancher Griff Lassiter is too kind to refuse, but too wary of being hurt again to offer anything but protection on the journey.

Then a fever forces an unexpected detour and a chance to find the place they both belong...


To learn more or get your copy, check HERE