If you are not familiar with our giveaway rules, take a minute to read them here. It keeps us all happy! All winners should send their name, address, and phone number to claim prizes.  Please send to Seekerville2@gmail.com. If the winner does not contact us within two weeks, another winner may be selected.

Monday: On Monday, Mary Connealy launched her new release! Elizabeth Litton is the winner of a signed copy of Braced for Love.

Wednesday:  Mindy Obenhaus gave us some insight into the author-editor relationship. The winner of a signed copy of her new release, A Brother's Promise, is... Jeanne Takenaka!!!

Friday: Debut author, Roulf Burrell, introduced us to all the voices - and characters - occupying his head and how embracing them led to writing his first fantasy novel. Glynis is the winner of an ecopy of Riddley Bundleforth and the Banshee Bell.

Monday: Carrie Schmidt welcomes guest blogger Amy Lokkesmoe (aka Amy Lynn Green) from Bethany House Publishers to kick off our new 'One Thing That Works For Me' series.

Wednesday:  Ruth Logan Herne is in the house. You never know what to expect!
Friday:  Melanie Dobson joins us to talk about "Why It’s Important to Study the Past." Stop by on March 12th and comment for a chance to win a copy of her latest release, The Curator's Daughter (courtesy of Tyndale Publishers).

Braced for Love is OUT
Book #1 - Brothers in Arms Series 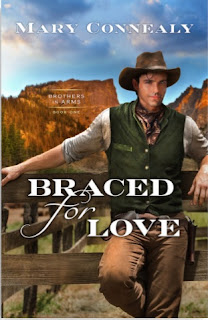 Left with little back in Missouri, Kevin Hunt takes his younger siblings on a journey to Wyoming when he receives news that he's inheriting part of a ranch. The catch is that the ranch is also being given to a half brother he never knew existed. Turns out, Kevin's supposedly dead father led a secret and scandalous life.But danger seems to track Kevin along the way, and he wonders if his half brother, Wyatt, is behind the attacks. Finally arriving at the ranch, everyone is at each other's throats and the only one willing to stand in between is Winona Hawkins, a nearby schoolmarm.Despite being a long-time friend to Wyatt, Winona can't help but be drawn to the earnest, kind Kevin--and that puts her in the cross hairs of somebody's dangerous plot. Will they all be able to put aside their differences long enough to keep anyone from getting truly hurt?
On sale now! 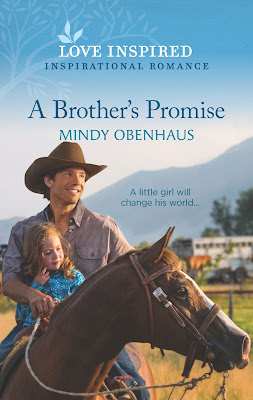 He didn’t realize he wanted a family… Until he suddenly became a single dad.

After his sister’s death, rancher Mick Ashford’s determined to ensure his orphaned niece, Sadie, feels at home. And accepting guidance from Christa Slocum is his first step. But just as Christa and Sadie begin to settle into Mick’s heart, Sadie’s paternal grandparents sue for custody. Now Mick must fight to keep them together…or risk losing the makeshift family he’s come to love.
Get your copy HERE!
Read the first chapter here. 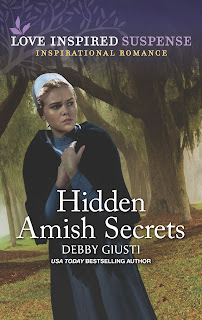 HIDDEN AMISH SECRETS
Her temporary Amish homecoming
could get her killed.
Julianne Graber left her Amish life behind after a family tragedy, but now she’s back to sell the family home— and someone’s dead set on getting rid of her. With her neighbor William Lavy by her side, Julianne must uncover dangerous secrets to make sense of the past and present. Can she find justice for her family—and a future with Will—before the killer hits his target?
March 9, 2021
Order HERE!
AND WISHING BRIDGE IS ON SALE!
You can buy all three of Ruth Logan Herne's bestselling Wishing Bridge books for $6.97/Kindle Editions... What a great way to add this amazing collection to your library.
LINK TO AMAZON 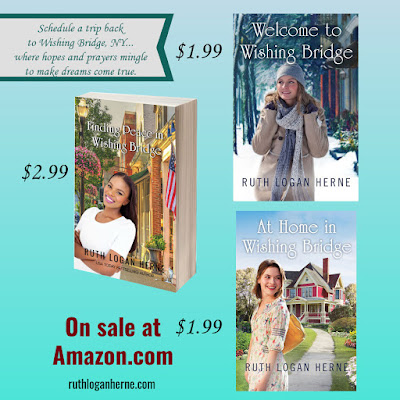 6 Places Infodumps Like to Hide in Your Novel by Janice Hardy at Fiction University
4 Easy Peasy Ways to Make Book Marks for Readers by LA Sartor at Book Brush Blog
Harnessing the Power of a Kiss by Bethany Turner at Learn How To Write A Novel
Archetypal Character Arcs, Pt 4. The Queen Arc by KM Weiland at Helping Writers Become Authors
Identity Publishing by Dan Balow at Steve Laube Agency
How to Copyright a Book: A Step by Step Guide by CS Lakin at The Self Publisher
Mind-Mapping: Using the Way We Think to Create Story by Sarah Sally Hamer at The Write Conversation
Self-Published Authors: Amazon Exclusive or Go Wide? by CS Lakin at Live Write Thrive
How Long is a Short Story? by Elaine Mead at Writer's Edit
Revisiting Characters by Shannon Taylor Vannatter at Inspy Romance
Also Boughts and Amazon Recommendations by David Gaughran
Shifting Gears in Your Writing by James Preston at Writers In The Storm
Grammarly Review - Is Grammarly Worth the Money? at Write To Done