It's Tricky to Remember to Forget

The hero in my soon-to-release novel A Man with a Past, has amnesia. I mean he has it through the whole stinking book....well almost. He gets his memory back at the end...in the nick of time you might say!

It was fun but I hope I did it alright.

I've written one other character with amnesia and before long at all I just flat out gave her her memory back. It was just too HARD to remember to forget.

You don't really realize it until you start writing it, but a character spends a lot of time with internal thoughts. And in ways large and small those internal thoughts are concerned with who they are. How something is affecting them.

Sure sometimes they think things like, "When I was married to Betsy, I'd've never said such a thing." Or more mildly, "He'd decided to never marry again. Losing Betsy had hurt too much."

You can't do that with amnesia. No worrying because you were frightened by a barking dog as a child, nearly struck by lightning as a teenager, lost your parents in a flood as a young adult.

Nope, none of that, because YOU CAN'T REMEMBER ANY OF THAT HAPPENED. 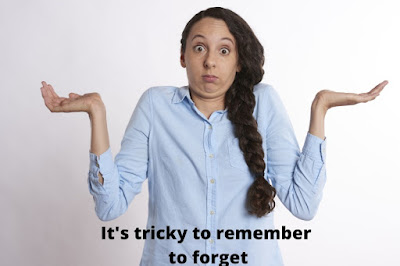 It's tricky to remember to forget.

You need to re-write, revised, regularly, specifically looking for oops moments when a character is acting as they normally do which includes, tiny moments of memory, the things that make a person who they are.

And that act of memory is so fundamental to writing...backstory...internal conflict...fears and joys and strengths and weaknesses. We are trained to write all of that into a character. Well forget it. My recommendation is frequent and very specific revisions looking for a character remembering or reacting based on a memory.

A bigger issue, how does having no memory affect your personality. ARE you afraid of dogs? ARE you afraid of lightning storms. Would you be? Seriously, how deep does a fear or phobia go? If you can't remember almost getting struck by lightning, then are you unafraid? I really couldn't quite decide. On this one, I just went with my own approach but I tried to be consistant about it.

Anyway, my hero Falcon Hunt isn't afraid of anything, so that doesn't apply.

He was a fun character to write because he talks like a Tennessee hillbilly. I'd never done a book with that strange, unique accent before and I enjoyed it.

An example of how Falcon talks from the opening of A Man with a Past:

When a man grows up in wild country, huntin’ food, eyes wide open for trouble, he knows when he’s being watched.

And that man there, back’a him weren’t out lookin’ for a place to have a Sunday picnic.

Falcon’d fought shy of a dozen towns and wanted no part of Independence, Missouri. Ceptin’ he didn’t know where in tarnation he was going and to his understanding this was his last chance to figure it out.

So he went ridin’ right smack into that beehive of a town on his old rawboned mule to find out how to get to Wyoming. And a man commenced to following.

To a lot of men, it might be right hard to spot a single man on these crowded streets full of shops and freight wagons. Everywhere he turned people swarmed.

But staying alive wasn’t easy in the Blue Ridge Mountains of Tennessee, where a man could find a way to die near every time he turned around. And yet here Falcon stood, as tall and rawboned as his mule, proving he was a tough, savvy man and he didn’t intent to trust to luck with that man on his tail.

He intended to trust to skill. 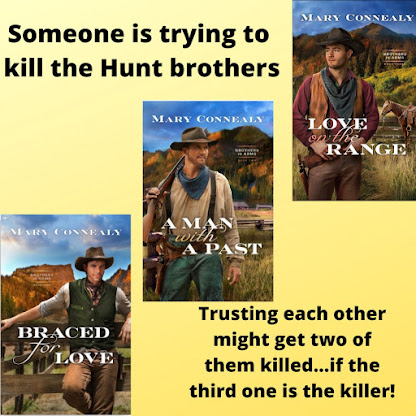 Falcon was fun to write. His main enduring skill is his utter trust in himself to take care of himself and anything else that cropped up. He had a skinning knife and his old single-shot rifle. And he has the wilderness. He can cloth and feed  himself and he isn't one speck worried about doing it.

And then a blow to the head, actually a gunshot to the head, and he can't remember a thing. And he's in the wilderness. Anyway, it was a lot of fun.

Today I'm giving away a signed copy of A Man with a Past. Leave a comment to get your name in the drawing.

A Man with a Past

Falcon Hunt awakens without a past, or at least not one he can recall. He's got brothers he can't remember, and he's interested in the prettiest woman in the area, Cheyenne. Only trouble is, a few flashes of memory make Falcon wonder if he's already married. He can't imagine abandoning a wife. But his pa did just that--twice. When Falcon claims his inheritance in the West, Cheyenne is cut out of the ranch she was raised on, leaving her bitter and angry. And then Falcon kisses her, adding confusion and attraction to the mix.Soon it's clear someone is gunning for the Hunt brothers. When one of his brothers is shot, Falcon and Cheyenne set out to find who attacked him. They encounter rustled cattle, traitorous cowhands, a missing woman, and outlaws that take all their savvy to overcome. As love grows between these two independent people, Falcon must piece together his past if they're to have any chance at a future. 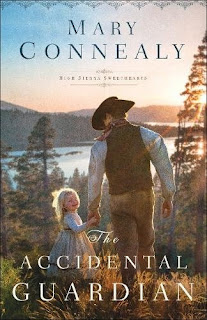 The Accidental Guardian is currently on sale in in Kindle for $1.99

Be careful when you click that the sale is still on. I noticed the NOOK book version has returned to full price so I suppose it's about over!