The One Thing: Finding the Binding Element of Your Story by Carla Laureano

Every story begins with a germ of an idea. Sometimes that’s what agents and marketers call the hook—a unique idea that captures the reader’s imagination and makes them want to buy the story. I like to call it the binding element—the thing that pulls the story together. But whatever your initial idea, it can be easy to lose sight of it in the process of transforming that initial spark into a readable plot—to the detriment of both the writing process and the final result.

In the case of my new release, Provenance, I started with the spiritual thread, a question that I wanted to answer: how do past experiences shape our identities and, as a result, affect our relationships with God? As I wrote, I kept that question in mind, made sure that it tied in with every element of my story—and consequently, the book came together more smoothly than any other novel I’ve ever written.

That initial idea, that “one thing,” when treated properly, becomes the primary element on which all the parts of your story hang. It doesn’t have to be as explicit as a question or a theme; it can be a feeling, an interesting character, a mood, even a landscape. When handled deliberately, it is the thread that binds all the plot elements together, serves as a trail of bread crumbs that leads the reader through the story. Most authors, if they’re avid readers, use repetition of elements unconsciously as they write; by doing it deliberately, you can shape your story more effectively, resulting in a quicker writing process and a more satisfying result. 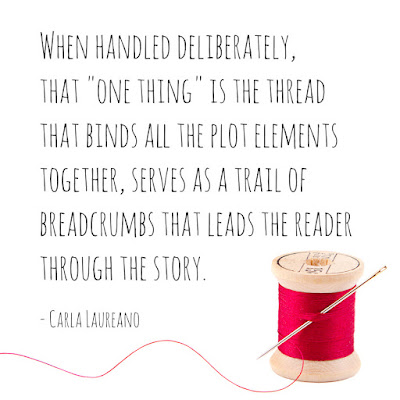 Let’s take a look at some of the common binding elements.

Theme
In Christian fiction, a thematic element is the most common starting point. As I mentioned above with my novel Provenance, the idea of how the past shapes one’s identity is the key factor in the main character’s personal journey: each bit of information that she learns about herself and her past gradually changes how she views herself and God. But it can be literal as well. In Blake Crouch’s sci-fi thriller Dark Matter, the protagonist’s questioning of his life choices propels him into a literal exploration of the roads not taken as he is thrown into the multiverse and has to find his way back to his own reality. Both stories have plenty of plot to drive the action forward, but without the thematic elements, they would feel like random occurrences rather than a cohesive force driving toward an inevitable conclusion.
Character
Perhaps the thing that first started the story idea was an unusual or unique character. Aren’t all stories driven by characters, though? Not necessarily. To be interesting, all characters have to be dynamic—they must change and grow over time—but there are plenty of books about ordinary people and how they deal with extraordinary situations. A character like Eleanor in Eleanor Oliphant Is Completely Fine becomes the “one thing” that holds the story together, because she prompts readers to constantly look for answers to their questions: Why is she so odd? How did she get that way? Is she completely fine . . . or might she be someday? The unusual character is the story hook, so you need to make sure that the initial promise of the character is carried all the way through to a satisfying ending. If she simply shrugged at the end and concluded that she was born odd and that was okay, the reader would feel cheated because there was no answer to the mystery that was Eleanor.
Mood
Mood is most often a factor in suspense or historical fiction, especially gothic horror or romance. Whether it’s a high degree of tension (or terror) or simply a gloomy, moody setting, the emphasis is on an immersive reader experience. The Death of Mrs. Westaway by Ruth Ware uses mood to great advantage: every chapter introduces a new element that contributes to a low level of dread, whether it’s the weather, a creepy old house, unsettling tarot cards, or the repeated appearance of magpies as harbingers of doom. Sure, there’s a mystery at the heart of the story, but without the attention paid to mood, it becomes a simple cozy and not a skin-crawling thriller.
Symbols and Metaphors
Symbolism and metaphor aren’t only the province of literary fiction, though you probably remember the definitions from discussions about the symbol of duality in A Tale of Two Cities or the green light in The Great Gatsby. But commercial fiction can use symbolism and metaphor just as effectively to tie together plot elements and elevate the meaning of a story above mere plot. Simply read Charles Martin’s The Water Keeper with an eye to the repeated water motifs and see how the literal settings transform into metaphors for danger, loss, change, baptism, and absolution. 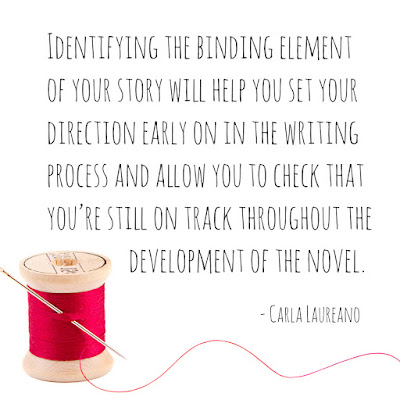 Just because you start with one element doesn’t mean that others can’t or won’t come into play over the course of the story. However, there’s something intriguing about the idea that spurred your desire to write that particular story, and in that germ of an idea is the hook that will make the reader want to explore it with you. Identifying that “one thing,” the binding element of your story, will help you set your direction early on in the writing process and allow you to check that you’re still on track throughout the development of the story—resulting in a faster, more interesting, and more cohesive first draft.

Carla's publisher, Tyndale, has graciously agreed to giveaway a copy of Provenance to one lucky commenter. US mailing addresses only, please. 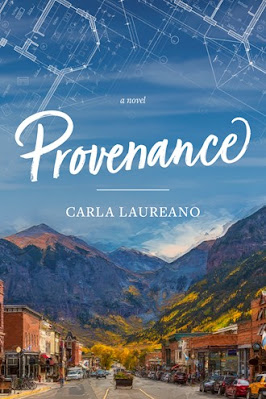 From two-time RITA Award–winning author Carla Laureano comes a story of romance, transformation, and the beauty of belonging.Los Angeles interior designer and former foster kid Kendall Green is in high demand, both for her impeccable eye and for her uncanny ability to uncover the provenance of any piece. But for all her success, skyrocketing costs have put her California home and her business in jeopardy. Then an unexpected inheritance provides a timely solution: a grandmother she never knew has left her a group of historic properties in a tiny Colorado town on the edge of ruin.To young, untried mayor Gabriel Brandt, Jasper Lake is more than another small town—it’s the place that saved his life. Now, seeing the town slowly wither and die, he’s desperate to restore it to its former glory. Unfortunately, his vision is at odds with a local developer who wants to see the town razed and rebuilt as a summer resort. He’s sure that he can enlist the granddaughter of one of its most prominent former citizens to his cause—until he meets Kendall and realizes that not only does she know nothing of her own history, she has no interest in reviving a place that once abandoned her.In order to save his beloved town, Gabe must first help Kendall unravel the truth of her own provenance—and Kendall must learn that in order to embrace the future, sometimes you have to start with the past. 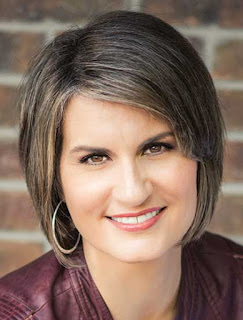 Carla Laureano is the two-time RITA® Award-winning author of contemporary romance and Celtic fantasy. A graduate of Pepperdine University, she worked in sales and marketing for nearly a decade before leaving corporate life behind to write fiction full-time. She currently lives in Denver with her husband, two sons, and an opinionated cat named Willow.