Hi Dear Friends! Debby Giusti here to introduce Jennifer Beckstrand, a Bestselling Author of Amish Stories, who is blogging with us today. She's written an amazing post that I'm sure you'll enjoy.

Character and Characterization: How to make your characters true, believable, and unforgettable!

Join me in giving Jennifer a warm Seekerville welcome!

I’m so excited to be here today to talk about one of my very, very favorite topics: writing great characters.

All great stories are about great characters. How do we as writers bring our characters to life?

Have you seen the movie “Hitch” with Will Smith and Kevin James? If you haven’t or even if you have, watch this scene on YouTube where we’re introduced to Albert Brenneman: https://www.youtube.com/watch?v=MIBzVc3kJAM

Be sure to come right back to join in the discussion.

Albert Brenneman is one of my favorite characters ever. In the movie, the director does several things to reveal Albert’s character to us and more importantly, make him instantly likable.

·        Albert spills mustard on his pants—This immediately makes him relatable. We’ve all felt klutzy on occasion.

·        He displays wide-eyed hope, and we can tell he sincerely likes the girl he wants to get together with. This makes him likable.

·        He doubts himself again and again and has us rooting for him from the very beginning. This makes him vulnerable.

·        He doesn’t have a perfect body or perfect hair. He wears glasses, and he gets down on himself for saying the wrong thing. This makes him believable.

I could spend three weeks talking about how to create amazing characters, but none of us have that much time, so I’m going to focus on just a few aspects of creating great characters. 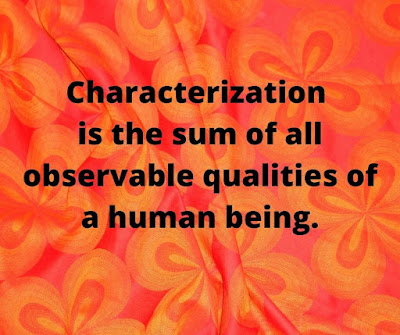 #1 Characterization is the sum of all observable qualities of a human being.

In his must-read book, Story, Robert McKee says, “The revelation of true character in contrast to characterization is fundamental to all fine storytelling.” 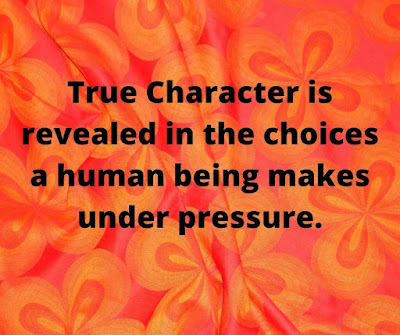 #2 True Character is revealed in the choices a human being makes under pressure—the greater the pressure, the deeper the revelation, the truer the choice to the character’s essential nature.

What choices does Albert make in this scene that reveal more of his character?

He is eager to give Allegra a pen, he gets frustrated, he decides to walk away.

What choices does Hitch make that reveal more of his character?

He listens, he laughs, he encourages, he’s kind

Pressure and conflict often reveal a person’s true character. “Pressure is essential. Choices made when nothing is at risk mean little.” (Story by Robert McKee)

Consider this scene: Two cars motor down a highway. One is a rusted-out station wagon with buckets, mops, and brooms in the back Driving it is an illegal alien- a quiet, shy woman working as a domestic for under-the-table cash, sole support of her family. Alongside her is a glistening new Porsche driven by a brilliant and wealthy neurosurgeon. Two people who have utterly different back- grounds, beliefs, personalities, languages-in every way imaginable their characterizations are the opposite of each other.

Suddenly, in front of them, a school bus full of children flips out of control, smashes against an underpass, bursting into flames, trapping the children inside. Now, under this terrible pressure, we'll find out who these two people really are.

Who chooses to stop? Who chooses to drive by? Each has rationalizations for driving by. The domestic worries that if she gets caught up in this, the police might question her, find out she's an illegal, throw her back across the border, and her family will starve. The surgeon fears that if he's injured and his hands burned, hands that perform miraculous microsurgeries, the lives of thousands of future patients will be lost. But let's say they both hit the brakes and stop.

This choice gives us a clue to character, but who's stopping to help, and who's become too hysterical to drive any farther? Let's say they both choose to help. This tells us more. But who chooses to help by calling for an ambulance and waiting? Who chooses to help by dashing into the burning bus? Let's say they both rush for the b u s - a choice that reveals character in even greater depth.

Now doctor and housekeeper smash windows, crawl inside the blazing bus, grab screaming children, and push them to safety. But their choices aren't over. Soon the flames surge into a blistering inferno, skin peels from their faces. They can't take another breath without searing their lungs. In the midst of this horror each realizes there's only a second left to rescue one of the many children still inside. How does the doctor react? In a sudden reflex does he reach for a white child or the black child closer to him? Which way do the housekeeper's instincts take her? Does she save the little boy? Or the little girl cowering at her feet? How does she make "Sophie's choice"? 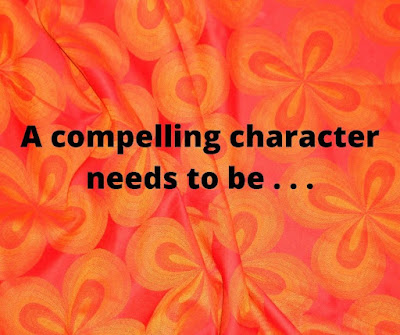 #3 A compelling character needs to be

Is the protagonist someone the reader can root for? I love the first scene in “Iron Man” when Tony Stark is riding in the Humvee with a bunch of soldiers. The way he talks and relates to the other soldiers makes him immediately likable. Albert Brenneman is another character that I think is instantly likable. However, your protagonist doesn’t have to be likable all at once. (Think Ebeneezer Scrooge or Mr. Darcy.) In one of my first Amish books, Miriam’s Quilt, Miriam is quite a snob, but life hands her some setbacks, and she comes to know herself. Then we really start rooting for her.

Is your heroine too good to be true? Too bad to be true? One T.V. series I loved to watch was Poldark, because I thought Ross Poldark was both deeply good and deeply flawed. I really soured on the series when Ross did something that I thought was out of character—I didn’t find him believable anymore. If you create a 75-year-old granny who fights off bad guys with her fists, you’d better show us that she works out five hours a day and drinks protein shakes for breakfast, lunch, and dinner.

Relatable: You want the reader to say, “I totally understand. I’ve been there.” If your characters are too perfect, the reader can’t relate to them. That’s one of the reasons I love the above scene from Hitch. Albert spills mustard on his pants. Most of us have done that and sometimes before a very important appointment or meeting.

Vulnerable: This can mean broken, weak, flawed, or all three. Many of the greatest protagonists are deeply flawed: Sydney Carton in A Tale of Two Cities, Edmund Dantes in The Count of Monte Cristo, and Katniss Everdeen in The Hunger Games. Harry Potter is vulnerable because he is a child. Children are easy to make vulnerable. It’s a little harder to do with adults.

These four things add up to characters that readers care about. Of course, this doesn’t apply to all characters, but readers must care about what happens to your main characters.

Who is this sailor? Where does he come from? Chandor (the director) never sees fit to tell us. His hero remains a deliberate stencil, defined solely by the crisis around him and the actions he takes. Ironically, given the abundance of ocean, All is Lost is an entirely depthless drama. Here is a film that exists purely in the moment, bouncing us inexorably from the bad to the worse. There is no journey towards redemption and no cozy life lesson lying in wait at the end. There's just the sea and the sky and the struggle to survive.

Plot is essential, but it is well-written characters that really make a great book.

I hope you’ll check out the characters in my next book, His Amish Sweetheart, which comes out June 28. Eight-year-old twins Alfie and Benji Petersheim will do anything to get rid of their brother—even find him a wife.

Don’t miss this delightful love story about friendship, second chances, and smoke bombs. You’re going to fall in love with the characters!

Preorder His Amish Sweetheart on Amazon, Walmart, and Barnes and Noble.

"A Peanut Butter Christmas" which also features the incorrigible twins as they try to create a Christmas miracle for Mary Yutzy. Leave a comment to be included in the drawing!