Erica here, happy to bring you a guest post by DeAnna Julie Dodson. We 'met' via literary agency boo boo. :) We are both represented by the same literary agency, and often, when an author has a book published, the agency receives some free copies of the books. Often they will keep one and mail the extra copies to the author to be used in promotion. Before Christmas, I received a package from the agency, thinking it was probably my latest release, Millstone of Doubt. Imagine my surprise when it was two copies of a lovely Christmas mystery by DeAnna Julie Dodson!

A quick email to the agency confirmed that the office manager had accidently sent me the wrong books, and that mine had gone to DeAnna. After a brief discussion, we decided that we would do a book swap of one of the copies, and we would mail the other back to the correct author. It actually turned out to be quite fun, because DeAnna's book was delightful. It's called Away and in Danger, if you're interested, and it's available through Annie's Fiction.

Anyway, I enjoyed it very much, and I asked DeAnna if she'd be willing to blog here with us today at Seekerville. (FYI, DeAnna also writes under the name Julianna Deering, and she's got a delicious series of mysteries set in England.)

When I was writing my Drew Farthering Mysteries (under the pen name Julianna Deering), I had to create a main character that people would want more of after each adventure. He needed to be just a little larger than life, but far from perfect. He had to have something he wanted to achieve, he couldn’t take himself too seriously, and he had to be someone readers would want to spend time with again and again.

Since I was writing in part to pay tribute to the mystery writers I love (Agatha Christie, Dorothy L. Sayers, Margery Allingham, and many others) and a number of classic mysteries and romantic comedies from 1930s Hollywood (The Thin Man series in particular) with a nod to P. G. Wodehouse, I made Drew my ideal amateur sleuth — very British, wealthy, educated, stalwart, determined to find the truth, and possessing a touch of humor to go with his logical mind. A reviewer once wrote that “if Jessica Fletcher and Bertie Wooster ever had a love child, it would be Drew Farthering.” Exactly what I’d hoped for! 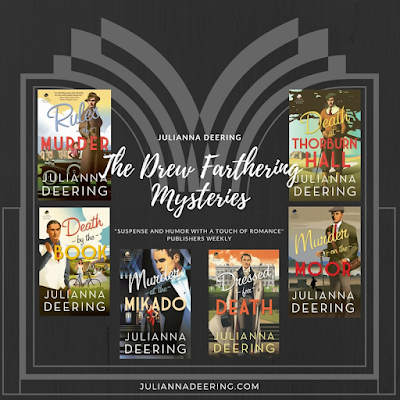 Of course, being the series star, Drew had to have a cast of series characters to keep him company. I’ve always enjoyed the differences in language and customs between American and British people, so my first thought was to make his love interest, Madeline Parker, come from the United States. He finds she’s his equal in wit and determination and in her love of mystery novels and literature in general. Sidekick Nick Dennison went to Oxford along with Drew, but since he is the son of the family butler, their friendship causes some social friction among Drew’s high-society friends. The three of them, Drew, Madeline, and Nick, work together to solve mysteries and deal with the general ups and downs in life, and their different backgrounds and experiences help them accomplish more than they would be able to separately. Every series needs a basic “family unit,” and they’re the core of mine.

It’s a good idea to have some kind of theme for your series. There are a lot of series with cooking or crafting themes. Some have military or ex-military heroes or different types of law-enforcement officers. Some are animal themed or have supernatural or fantasy elements. I decided early on that Drew’s adventures would each be based on something literary. His first book, Rules of Murder, is based on Ronald Knox’s 1929 “Ten Commandments” for detective fiction (ruling out such things as surprise twins, more than one secret passage, etc.). The other books in the series have connections to Shakespeare, Gilbert and Sullivan, Jane Austen, Sherlock Holmes, and classic Russian novels. These are only a thread through each story, but they have some connection to the mystery along with highlighting my main characters’ love of reading.

Setting, it has been said, is also a character. What better setting for a series of 1930s English mysteries than the quaint village and the old family manor in the English countryside? Whatever theme you choose for your series, it’s important to have a setting that supports and enhances it. Ideally, it reflects something about the main character and his own life, too.

Of course, again like series television, part of what keeps readers engaged throughout a series is the development of the main characters over all of the books. They enjoy getting to know these people, and they want to be emotionally involved in their lives. I’ve found that one of the worst things a series writer can do is leave a main character’s personal quest unfulfilled by the time a series is over. Readers want that closure, no matter what it is. On the other hand, they do not want the actual mystery in a particular book to go unsolved until the next book or, worse, even beyond that.

Every one of Drew’s adventures has a main mystery that arises and is solved in that book. But he also has something he wants to find out about himself that covers the whole series, sometimes in very small ways, sometimes in major ones. Like the romance between Drew and Madeline, it has its own arc starting in Book One. Including longer series arcs gives your characters a touch of reality. It helps your readers believe these people exist outside of the portion of their lives contained in the books. The more real the characters are, the more readers care about them, and getting readers to care about your story and the people in it is a great way to keep them coming back for more.
About DeAnna/Julianna

DeAnna has always been an avid reader and a lover of storytelling, whether on the page, the screen or the stage.  This, along with her keen interest in history and her Christian faith, shows in her tales of love, forgiveness and triumph over adversity.  A fifth-generation Texan and graduate of the University of Texas at Dallas, she makes her home north of Dallas with three spoiled cats and, when not writing, spends her free time quilting, cross stitching and watching NHL hockey.  Her first books, In Honor Bound, By Love Redeemed and To Grace Surrendered, are a trilogy of medieval romances.  She has also written several contemporary mysteries for Annie's Attic and Guideposts.  And, writing as Julianna Deering, she is the author of a series of 1930s English cozies, The Drew Farthering Mysteries from Bethany House: Rules of Murder (2013), Death by the Book and Murder at the Mikado (2014), Dressed for Death (2016), and Murder on the Moor and Death at Thorburn Hall (2017).  She is currently represented by Wendy Lawton of the Books & Such Literary Agency (wendy@booksandsuch.biz).
You can visit DeAnna's website by clicking HERE.
You can find and purchase DeAnna's books HERE.
Thank you so much, DeAnna, for guesting here at Seekerville today, and thank you for this fascinating look into creating characters for a continuity series. I'm so glad we had a 'happy accident' with our books being mailed to each other.
By Erica Vetsch - January 24, 2023