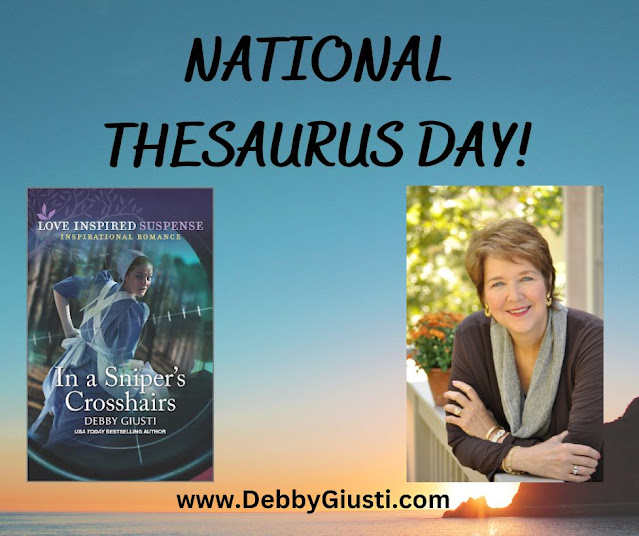 When I realized today was National Thesaurus Day, I reached for my copy of Roget’s International Thesaurus, blew off the dust and wondered why a favorite reference book had, over the last few years, been ignored on my office bookshelf. Flipping through the pages of my rather aged Fourth Edition advertised to contain 256,000 words and phrases, I had a renewed appreciation for the effort involved in creating such an outstanding tool for writers. Intrigued by a book that continues to be a reliable resource, I wanted to learn about the mastermind who had compiled the first thesaurus.

I found a short biography in my own edition that spurred me to dig deeper into the life of Peter Mark Roget, the physician and scholar-wordsmith who had compiled the first Thesaurus, a name taken from the Greek and Latin words meaning treasure. To attempt—and succeed—at such a huge endeavor (and doing so prior to computers) is a testament to Roget’s hard work and persistence as well as his keen intellect.

Roget was born in London on this day in 1779. He entered the University of Edinburgh when he was fourteen, and graduated from medical school by the time he was nineteen. In 1805, he began to practice medicine at the Public Infirmary at Manchester and was soon heralded as not only a qualified physician but also an astute medical lecturer. Five years later, he moved to London and aided in the establishment of the Northern Dispensary, a charity clinic, where he cared, free of charge, for those in need.

Honors and accolades soon followed. He was known as an inventor, created a slide rule and was an avid chess player. At the age of 36, he was elected into the Royal Society, a fellowship of the most learned minds in math, engineering and medicine and served as its secretary for twenty-plus years. He wrote numerous papers on physiology and health, including an extensive study on the animal and plant kingdoms that was highly acclaimed in his day. Additionally, he penned articles for the Encyclopedia Britannica.

Although his achievements were numerous, Roget is remembered for his Thesaurus. Always a lover of language, at age twenty-six, he compiled a list of 15,000 words arranged by meaning that served as the initial draft of his later work. It was only after he retired from a prestigious career in medicine, that he resumed categorizing words and in four years had completed the manuscript.

Published in 1852, that first edition was titled Thesaurus of English Words and Phrases, Classified and Arranged so as to Facilitate the Expression of Ideas and Assist in Literary Composition. The title explained the uniqueness of Roget’s work and how it could be used by writers in any discipline. The first edition was an instant success, and a second edition was published a year later, followed by a third edition in 1855.

Roget continued to add to and enhance many subsequent editions of his work. Before his death in 1869 at age ninety, he was revising the twenty-eighth printing of his thesaurus. His son John took over after Roget’s death, followed by his grandson and eventually Thomas Y Crowell who acquired access to the book in 1879.

Roget’s Thesaurus is not a dictionary, but rather, as the Publisher’s Preface in my thesaurus states, “a grouping of words according to ideas.” Roget divided his words and phrases into categories, such as Abstract Relations, Space, Physics and Matter. Just prior to publication, he added an alphabetized index in the appendix so readers could more easily find synonyms for specific words without having to sort through the various large groupings.

More than 40 million copies of Roget’s Thesaurus have sold over the years, and the book continues to be a valued reference for all wordsmiths. From now on, I’ll keep my copy close to my computer and am determined to use it when searching for that perfect word to enhance my writing. I’m grateful to Peter Mark Roget for the thesaurus he created—a storehouse of words and a treasure for all.

Do you have a thesaurus? Do you use it? What impressed you about Peter Roget?


IN A SNIPER’S CROSSHAIRS

An assassin’s loose in Amish country…and she’s not the only target.

When a radio broadcast describes taxi driver Lily Hudson’s passenger as an armed criminal, she becomes his immediate target. Narrowly escaping, Lily accepts Matthias Overholt’s offer to hide at his Amish family farm for Christmas—until evidence reveals the gunman’s plan is tied to Lily’s past. Now to prevent an assassination, Lily and Matthias must unravel a years-old conspiracy…and evade a sniper who has them in his sights.