Kiss and Tell (part one): Creating a Swoonlicious Book Boyfriend 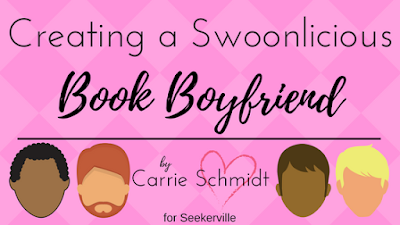 Anyone who hangs around me for any length of time - online or in "real" life - learns pretty quickly that I'm an avid collector of book boyfriends. My husband has resigned himself to this collection, goodnaturedly tolerating my swoons over fictitious heroes and pretending not to notice that most of them are based on Henry Cavill or Chris Hemsworth.

(Now, before anyone starts clutching their pearls... He's not threatened because he knows I know they're fictional. After all, my husband is my very own Mr. Knightley and that's the best kind of hero anyway.)

Of my reads from the past three years or so, there are five heroes that I have quite a crush on. See, I fall in love with book boyfriends while I'm reading their particular story but more often than not when I move on to a new book, I move on to a new book boyfriend as well. (It's not cheating if they're fictional! The internet says so!) However, these five guys made such an impression on me that a) I can't quit talking about them and b) I put them on a shirt. 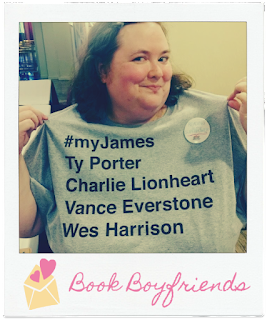 In case you haven't met them yet, let me introduce you! Meet James MacDonald (aka #myJames) from Carla Laureano's Five Days in Skye, Ty Porter from Becky Wade's Meant to be Mine, Charlie Lionheart from Joanne Bischof's The Lady and the Lionheart, Vance Everstone from Dawn Crandall's The Cautious Maiden, and Wes Harrison from Pepper Basham's Just the Way You Are. Ironically enough, three of these swoonlicious fellas look like Henry Cavill. For those of you taking notes, that's not a MUST but it certainly helps ;)

Since I debuted my book boyfriends shirt, I've been asked this question more times than I can count:

How do my heroes get on your shirt???

Now, aside from the potential awkwardness beget (begotten?) from a question such as this one, I have been mulling over a list of characteristics that make these five book boyfriends (and your future heroes) shirt-worthy.

Now, take this advice with a grain of salt because every reader has her own preferences. Some like flirty heroes. Some like brooding Mr. Darcy-types. Some go for the nerds. Some get weak-kneed over the bearded lumberjacks (I'm looking at you, Beth Erin!) and others prefer a scruffy cowboy or a dashing Brit. It also depends on what kind of chemistry the hero has with the heroine, and the overall quality of the story.

Dear readers, the stuff of fairy-tale romance and happily-ever-after is in our soul's DNA. God has set eternity in our hearts (Ecclesiastes 3:11) and I believe this is one reason we crave the Prince Charming who comes riding in on a white horse to defeat evil and whisk away as his bride. Sound familiar? Yes, that's basically the plot of every fairy-tale and nearly every romance ever written. But it's also THE plot. It's the story God has been telling from the beginning!

One day Jesus WILL come riding in on a white horse as our Prince of Peace to defeat evil and whisk us away as His bride (Rev 19) to the ultimate happily-ever-after (Rev 21). As we wait for it play out in reality, we read little reflections of it in the meantime. This is why we collect book boyfriends... and this is why certain heroes make it onto my shirt. Because in their stories, I see The Story. They remind me that THIS is love, that someday my Prince will come... in a tale as old as time.

Until then, I'll keep collecting book boyfriends and adding them to my shirts. I've already got a list going for the next one ;) 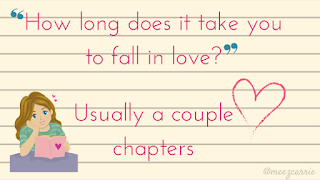 Authors: What do you find most difficult about writing a swoony hero?
Readers: Who are some of your fave book boyfriends?


Let me know in the comments & you'll be entered to win ONE BOOK of your choice from ONE of my book boyfriend lists found here:

(I told you I talk them about them alot LOL)

Giveaway is open internationally, provided Book Depository has the book of your choice and ships to your location. Void where prohibited by law.
By MeezCarrie - April 13, 2018