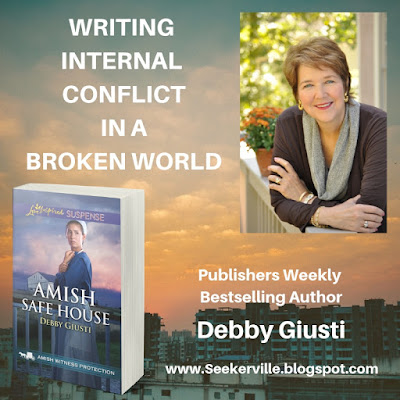 Writers often talk about their characters’ goals, motivation and conflict, or GMC. The goals refer to what the hero or heroine wants—something concrete, like saving Grandma’s Victorian home from foreclosure. The motivation is why he or she needs to achieve that goal. Perhaps her great-grandfather built the house for her grandmother as a wedding gift. The house is a central focal point for the small surrounding town that has fallen on hard times. If the Old Victorian can be refurbished and turned into a B&B, which was Grandma’s dream, the dying town might restore other buildings and find the wherewithal to be a viable community once again. The conflict is any external force attempting to stop the protagonist from achieving her goal. Perhaps the bank has a buyer ready to purchase the old home, and the hardhearted banker refuses to give the protagonist time to accrue the funds needed to pay off the mortgage. If the heroine is trying to save the house and the hero is the buyer interested in razing the property and building something else in its place, the story has conflict and seemingly the makings of a salable manuscript. 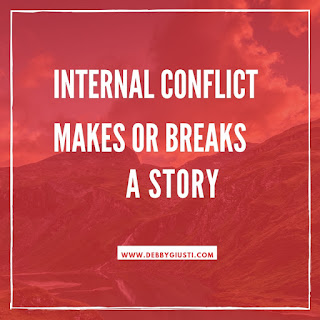 But one ingredient is missing from the mix…something that, in my opinion, makes or breaks a story…Internal Conflict. When a story is rejected for not being compelling (a rather abstract term, yet one editors and agents frequently use), chances are it’s because of the lack of internal conflict.

What’s keeping the protagonist from embracing life? What keeps him from falling in love? What makes her reclusive instead of free to fully accept love? Often our fictional characters, just as in real life, have buried a specific past pain and don’t realize the tremendous effect that wound plays in their lives.

Years ago in my pre-published days, I remember chatting with a fellow writer about character development. “Surely,” I bemoaned, “I can’t delve too deeply into my hero and heroine’s internal angst.” I feared piling on too much painful backstory when in reality, because of our broken world, the backstory – specifically the internal conflict – needs to be well-defined and significant. 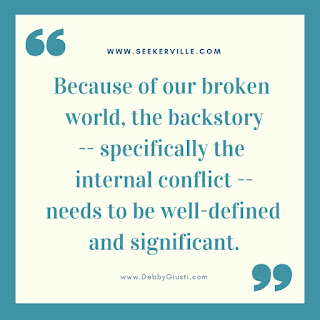 So many issues split apart families. About 50% of all marriages end in divorce and that percentage increases among those who have married more than once. Many folks have severed relationships not only with their spouses but also with siblings and even their parents. The proverbial mother-in-law jokes ring all too true in many households where in-laws are excluded. One older couple moved to my local town to be close to their son, an only child. All too quickly, the daughter-in-law decided she didn’t like her in-laws so the older folks were never allowed access to the family. Another couple has been forbidden to see their only grandchildren who live just a few miles away. That pain of imposed separation is heartbreaking and all too common.

Within the Amish community, a baptized church member is shunned if he goes against the Ordnung, the rule by which the community lives. Shunning is not considered a punishment but, rather, is enacted for the good of the wayward member in hopes he will realize his error, ask forgiveness and return to the fold. While most of my Amish heroes and heroine are not yet baptized, I sometimes include parental disapproval and ostracism to increase the guilt the protagonist carries because of a mistake in his or her past.

Money issues can destroy a family. Living beyond a person’s means causes untold heartache and suffering. Overextended credit compounds the problem, and if not checked, financial struggles can lead to home foreclosure and homelessness and even bankruptcy.

My Amish Protectors series features three sisters raised in a dysfunctional home by a single-mom who struggled to make ends meet. The small family moved often as the mother searched for greener pastures and a better life that she never achieved due to her nomadic lifestyle and mishandling of money.

Turn on the nightly news and you’re bound to hear a story about the opioid crisis or teen/young adult suicide often blamed on drugs. In addition to drug addiction, alcohol, pornography and gambling tear marriages and families apart. The person addicted finds his or her life spiraling out of control. Those around him – especially loved ones – feel caught in that spiral as well.

Methamphetamine is both easily accessible and destructive. It’s also prevalent in my part of the world. I’ve written about its ravages in a few of my books, including a November 2019 release I recently turned in to my editor. I’ve also used drug related deaths and possible suicide cases, involving secondary characters, to up the suspense in a number of my stories.

Chronic illness, debilitation, old age and dementia are part of life. Concern about an aging parent or a sick child play into our stories. I had an Amish woman whose father needed medical care and refused to go to Englisch doctors. Another woman had miscarried her first child and feared her second pregnancy would not go to term. In Protecting Her Child, my heroine had been given up for adoption as an infant. As the story opens, she is pregnant with her murdered husband’s baby and learns she may have transmitted a life-threatening illness to her unborn infant. 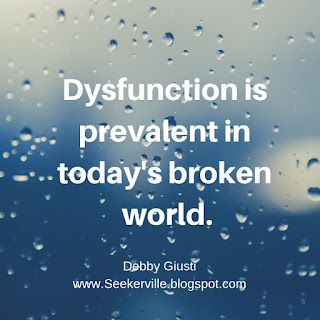 While all of these situations add conflict to our stories, they are not the Internal Conflict. The Internal Conflict is a wound the main character carries often from childhood that involves a misperceived negative self-worth that the hero or heroine accepts as truth. He lives life trying to compensate or cover up that which he has erroneously accepted as fact. For the writer, it’s important to tie that wound to a specific incident in the protagonist’s past. That moment needs to be revealed in the course of the story. Often the memory of the wound is buried deeply and its revelation involves great pain, yet the wound must be revealed in order to heal.

Mistakes the protagonist has made in the past are the fruit of that character’s brokenness and are directly related to the wound. If a child overhears her father saying she will never amount to much, that child might accept the statement as truth. As she grows, the daughter might overcompensate and try to win her father’s approval or she could live life in the wrong direction and never attempt to make anything of herself. Because love is the most important need, our character may think if her earthy father doesn’t love her, her heavenly Father cannot love her as well. Yet she yearns to be loved so, as the song by Johnny Lee says, she “searches for love in all the wrong places.”

When she finds her own true love, she recalls her past mistakes and fears Mr. Right could again turn into Mr. Wrong. If she can trust her heart and her love interest enough to reveal that moment in her childhood when she stumbled onto what she perceives is the truth about herself, she can see it through adult eyes and perhaps through the eyes of the man she truly loves. She might confront her father or learn about the pain he carried that kept him from truly loving anyone, even his young daughter. That realization coupled with a newfound or renewed faith in Christ and acceptance of the Lord’s forgiveness and mercy can heal her brokenness so she can accept love and embrace life to the full.

Similarly, a child might believe he is responsible for his parents’ divorce, especially if his parents called him a difficult or disruptive child. He grows up with that guilt, believing he doesn’t deserve nor could he maintain a happy marriage of his own. In the same way, a child who has been abandoned, could carry that wound into adulthood and be inhibited by a fear of being abandoned again if she enters into a relationship. 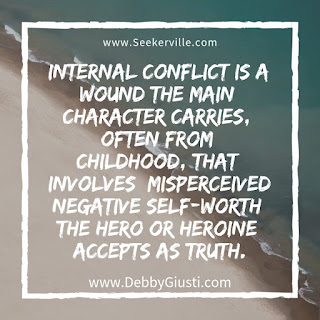 Story consultant Michael Hauge talks about the wound in his workshops. Others do as well. I find it plays out in real life. If you struggle with self-worth or a feeling of inadequacy, trace that feeling back as far as possible. Can you pinpoint a memory that is still painful? Healing prayer often involves bringing that memory to mind and then seeing Jesus standing in the mix. He embraces the wounded person and reveals the truth about who she is and how much she is truly loved. In our books, healing can occur rather quickly while in real life those issues often must be prayed over many times before healing can occur. Along the same lines, the person must forgive herself for mistakes made and see those mistakes in light of that brokenness. Once we understand why we acted in a certain way, we are more prone to forgive ourselves and ask forgiveness from the Lord – and then accept that forgiveness. Another facet of this is that we all struggle with one dominant issue throughout our lives. Smaller problems tie into that deep wound. The problems we face as a child, be they low self-esteem or a feeling of inadequacy, will continue to adversely affect us, no matter our age, until we deal with that initial wound. 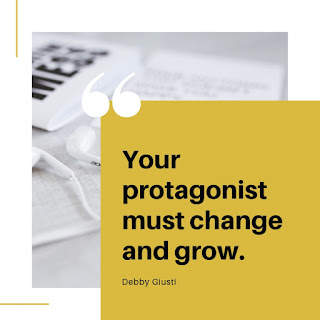 A lot to think about, but I hope you’ll consider your character’s inner conflict when you write your stories. The wound should be alluded to early in the story but dealt with toward the end as part of the character’s transformation. Remember your protagonist must change and grow. She becomes a different person by the end of the story. Even if she returned to her ordinary world where she lived at the beginning of the story, she would react in a different way because of that change of heart, healed brokenness or realization of the new person she has become.

Those of us who are Christian writers understand the power of prayer and the need to seek forgiveness from God. When our characters find redemption, our readers—especially those dealing with similar issues—are given hope and turn to the Lord in their brokenness. That transformation can be therapeutic as well as spiritual.

Do you create wounded characters? Have your heroes and heroines struggled with past guilt and feelings of being unworthy of forgiveness? What type of characters do you find most relatable? Can you recall stories that deal with a hero or heroine’s internal conflict and wound from the past? What did you find most compelling about those stories?

Leave a comment to be entered in a drawing for a copy of AMISH SAFE HOUSE, the second book in the new Love Inspired Suspense Amish Witness Protection continuity! 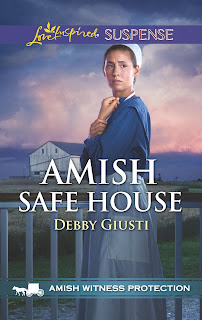 After Julia Bradford’s son witnesses a gang shooting, hiding in witness protection on Abraham King’s Amish farm is the only hope the Englischer and her children have. Even as danger closes in, Julia is drawn to the community’s peaceful ways—and the ex-cop turned Amish protector. But when their location is discovered, can Abraham protect her family…and possibly have a future by her side?