A 15 Letter Word NOT Equal to Lazy


If you visited Seekerville a few weeks ago, you might have read Missy graciously reposting a piece I did as a guest on Seekerville several years ago. Writers Write

I liked that post. I felt like it was a good introduction. But as I prepared to write my first regular column, I was plagued by a favorite writer’s question – What if?

What if writers don’t write?

The obvious answer to that is, if writers don’t write, then technically they’re not writers.
But…

What if… you’re still making up stories in your head, but not getting that time in front of the keyboard (or in a notebook) to get them down.
Again, the obvious answer – technically, you’re not a writer (though in this case you could still claim to be a storyteller).

So, if you’re a writer, if you want to be a writer, why aren’t you writing?

There can be many reasons, some valid, some mere excuses.
I should know. I’m a pro with both.

In the interest of fair disclosure, I decided to write about this problem today because I know it inside out and back again. Those valid and invalid reasons? I know them too.

Some of you know that my husband passed away after a brief (3 month) battle with cancer. I had a novella due for a collection right after his death. Somehow, by grace and the blessings of numbness, I finished the story on time. What few people know was that his death came on top of a 2 -3 year very difficult period, and it all began just as I sold my first book to Love Inspired Suspense.

I don’t say this to make excuses for myself. Lots of people write through illness (their own and that of family members or friends). I assume if writing was my job, I would have also. But I have a full time job as a teacher and a part time job as a tutor. There was just not enough mental energy to deal with everything, so writing fell by the wayside.

My sum total of writing during that period was edits on my LIS, 3 novellas, and lots (and lots and lots) of pages written on future books – but none of them completed.

Not really satisfactory for someone who claims to be a writer.

There’s a nasty word for it and it’s way more than 4 letters. 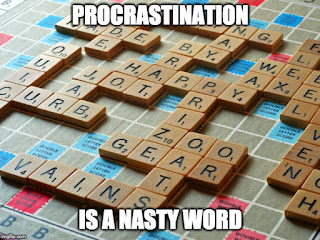 So yes, my first regular Seekerville post is about PROCRASTINATION.

My name is Cate and I am a procrastinator.

Can any of you relate?

According to my research, I’m far from alone.

I decided to do this post about procrastination after I read an interesting article online. According to the article (I’ll link it below), we are not procrastinators because we are lazy.

Did you read that correctly? NOT lazy.

That article sang to me because who wants to be called lazy (even by themselves)?

But you know how when something seems too good to be true, you can be a little suspicious?

I was suspicious about this not lazy thing. Because honestly, when I know I’ve been procrastinating, I feel lazy.

But there was something niggling in my brain. I’d had a conversation with my boss recently about how we were both terrible procrastinators because we had to be feeling the pressure of a deadline to be able to produce anything.

True story: I had to make a 45 minute presentation at an educational workshop last Friday. On Wednesday, he asked me how I was doing with it. I replied. “I’m fine. I haven’t started it yet.” He laughed because he totally understood.

Before you pick your jaw up off the floor (or nod your head in understanding), let me say that I had been THINKING about it. I knew what I wanted to say and I knew which photos and videos I wanted to use. I just hadn’t begun to physically put it all together. Why?

My brain doesn’t work that way.

I have tried. I've begun working on things early, but I come up blank. Deadlines clear my brain and allow me to finally focus.


True story:  When I was doing my final edits for Christmas in Hiding, I was stuck. I had known from Day 1 that my editor didn’t love my opening. No matter what I tried to do, I couldn’t come up with a better one.
All my other revisions were due and the deadline was looming. So I sat down and wrote it. And just like that, the pieces fell into place.

The lesson you pick up along the way is that if you wait long enough, it will all work out.

It's an easy lesson, but there is a big problem inherent in this method.

NO DEADLINE = NO PROGRESS

And that's why I wanted to blog about this. I'm tired of the "no progress."

So let's get to the research.


Okay, so then why do some people never procrastinate, and some of us do on everything?

The original article that I mentioned has this quote from Fuschia Sirois, professor of psychology at the University of Sheffield:


"...we say that procrastination is essentially irrational," And, she reveals, "people engage in this irrational cycle of chronic procrastination because of an inability to manage negative moods around a task."

According to Sirois and Tim Pychyl of Ottawa's Carleton University, you might understandably think overcoming procrastination is first concerned with task completion, in reality it's primarily concerned with "the immediate urgency of managing negative moods."

They go on to say that negative feelings about the task are what make you procrastinate. You might be afraid of failure or of being overwhelmed by the task.

I could see that being true in some cases, but I know I procrastinate even when it is something I DO want to do, or at least don't mind doing. Why?

So I continued to research.

According to an article on BBC Future, "Procrastination is rooted in personality, and some research points out that it might be caused by the way some people's brains work."

Apparently those of you who are not procrastinators have brains that have managed to overcome this.

For me, this is where it became really interesting.

In an article called "Brain freeze: The science of procrastination and our 'smart' brains," I found this line that agreed with the original article I read.

"Procrastination is, in fact, an emotional issue, not a time-management issue. It is about the fear of losing, the fear of guilt and the fear of making a mistake."  https://thenextweb.com/lifehacks/2014/03/27/brain-freeze-science-procrastination-smart-brains/

Then I got to this line, and it hit a little too close to home.
"Procrastinators prefer people to think they are just not making an effort, rather than the fear of showing less ability to do something."

Suddenly I was remembering an argument I'd had with my father close to 50 years ago. I remember it as clearly as yesterday. I was trying to convince him that I was as smart as my classmate Martha. The only difference was that she worked harder. I could pull those grades if I worked as hard as she did.

Dad wasn't buying it. He told me it didn't matter who was naturally smarter. If she was doing the work and pulling higher grades, then she was the one who was smarter. Can I just say that all these years later, it really burns to learn that Dad was right?

And that's when I got really mad at myself. If I was one of my own students, I'd be trying to find ways to help me,

What do we do? How do we procrastinators of the world do battle with our brains?

I'm going to share some ideas I've read or come up with, but I would love to hear your methods of coping with procrastination.

1. For me, I've found that I need a specific routine and it has to become a habit. If I say I will write 1k a day every day, I have to write it EVERY day. If I miss even once (no matter how valid the reason), I've lost the discipline, and I'm back to procrastinating.

A few months ago, my editor, Emily Rodmell, posted this on Twitter. I took a photo, printed it out, and posted it around the house. It's sort of like having her sitting on my shoulder reminding me to #finishthebook!

2. Just start. This goes with #1. I have a quote saved to my desktop from Stephen King.


The scariest moment is always just before you start.

3. Tell someone. I find it really helps if there is someone I have told that I am going to accomplish this. So I am telling YOU! I also told my editor. I AM going to finish this book by the end of July.

4. You're going to like this one. The Brain freeze article recommends rewards.
"Dr. Ferrari suggests that rewarding people for getting stuff done on time rather than punishing them for getting it done late is a more meaningful step to reducing procrastination."
I have seen this work with math games with the students at school. So figure out what reward would inspire you.
The science to back it up is in the article. "It seems that we need to train our brains to see task completion as a dopamine-producing experience rather than a norepinephrine-producing experience."

5. UPMC also recommends you give up that drive for perfection. "Don’t focus on a perfect, finished product, but rather getting a head start; all of the free time you have later can be dedicated to refining the project. So get out there and get started; you’ll be thanking yourself later."

6. Which brings us back to #2 - JUST START. It's not as hard as you think, and might actually be fun. You might actually get that dopamine rush from what you've written - but you'll never know unless you begin.


I'll leave you with this quote, also from Stephen King.


Amateurs sit and wait for inspiration, The rest of us just get up and go to work.

So, how's that for motivation? If you don't want Stephen King disapproving of you ...write!

In the end, it's up to you to battle the procrastination.

Maybe publishing your book is reward enough. Maybe you need a support group. Let's hear from you in the comments. How can we help each other be more successful writers?


If you would like to read up more on this, here's an interesting article on learning to focus better - Concentrate! - How to Tame a Wandering Mind.


Sources:
~UPMC Healthbeat:  https://share.upmc.com/2015/07/the-science-behind-procrastination/
~Ink.com: https://www.inc.com/peter-economy/why-laziness-is-not-why-you-procrastinate-your-emotions-are.html?utm_source=pocket-newtab  (This was the original short article that got me thinking.)
~BBC Future: http://www.bbc.com/future/story/20171122-the-science-of-procrastination
~https://thenextweb.com/lifehacks/2014/03/27/brain-freeze-science-procrastination-smart-brains/ (There is a lot more good information in this article. It explains the whole dopamine thing.)