Erica here. I am so honored to have my friend, Angela Ruth Strong here on the blog. Please give her a warm welcome!


This weekend my writing group rented a house and spent the weekend plotting our novels for the next year. Usually we go up into the mountains of Idaho but because of my breast cancer diagnosis, my nurturing friends decided to stay in town so we’d be close to a hospital should I need medical attention.

We had a great time, and I honestly believe their help in plotting A Mug of Mayhem will make it the best book yet in my CafFUNated Mysteries. I’m also thoroughly invested in their amazing manuscripts. 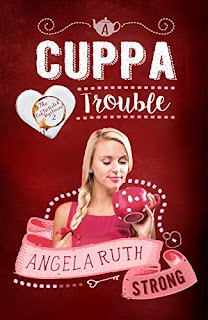 Between plotting sessions, we decorated cakes to look like our book covers, dressed up in wigs to look like our characters, and we sang worship songs. It's one of my favorite weekends of the year, and this year did not disappoint.

But leading up to this weekend, I was really bummed that my blood counts were too low for my weekly chemo treatments. That meant my chemo would be pushed out at least one week, and I couldn’t be sure it would end there.

My husband suggested that perhaps God allowed this to happen so my brain fog would clear for the weekend retreat and I could have to more to offer in our plotting sessions. I pouted at first, but then I chose to believe that with God as the author of life, He’d plot my story in just this way.

Such an idea goes along with an article author Betsy St. Amant sent me about "grace denied" and "grace supplied."

Basically, God knows we grow through our struggles, so He allows the bad stuff to happen just like we do to the characters in our books. This could be considered grace denied. For example, God allowed me to get cancer.

But here’s the important part. Within the circle of grace denied, God supplies the grace to endure. In this situation, He gave me an intermission from chemo so that I could fully get the most out of my retreat. He gave me what I needed to overcome the same way authors do for our characters.

When I first found out that I had breast cancer, I was instantly surrounded by the support of other survivors. They all said the same thing: “Welcome to the best club you never wanted to be a part of.”

None of us wanted to go through this. We would have avoided it if we could. But in our moments of weakness, in our circle of grace denied, we truly have to learn to look for the grace God will supply. And because of that, we grow stronger and have more to offer others.

Hopefully you never join this club. But like the character in any book, we all have our own struggles and opportunities to grow. Wherever you're at today, whatever grace you’ve been denied, I encourage you to look for the grace supplied.

This is your story. Make it a good one.

Angela Ruth Strong sold her first Christian romance novel in 2009 then quit writing romance when her husband left her. Ten years later, God has shown her the true meaning of love, and there's nothing else she'd rather write about. Her books have since earned TOP PICK in Romantic Times, been optioned for film, won the Cascade Award, and been Amazon best-sellers. She also writes non-fiction for SpiritLed Woman. To help aspiring authors, she started IDAhope Writers where she lives in Idaho, and she teaches as an expert online at WRITE THAT BOOK.

Just in time for Valentine's Day, Angela is giving away an autographed copy of A Cuppa Trouble!

Here's a bit about the story:

Can a couple of baristas chase down a car thief without spilling a drop of their favorite drink?

Plans for a Valentine's Day grand opening of a small town coffee shop go awry when the first customer is killed. Evidence points toward the victim being mixed up in a car theft ring, but shop owners Tandy and Marissa have reason to believe he was framed. An assortment of suspects--from a pink-haired heir to Tandy's charming ex--all seem to know a little too much about grand theft auto.

Without approval from either their boyfriends or the gum-chewing FBI agent in charge, the shop owners go on stakeouts, plan stings, and pursue justice in a high-speed car chase. If they don't find the killer soon, it might be more than their love lives in trouble.

If you'd like to be entered to win, please leave us a comment. We've all been touched by this terrible disease. Encourage Angela on her journey, give a shout out to someone you know who is walking the same path, or post a remembrance of someone you love who battled cancer. Tell us about Grace Supplied during a time of Grace Denied.
By Erica Vetsch - February 11, 2020