5 Reasons Why the Third MacDonald Novel was Worth Waiting For

Let's give a hearty Seekerville welcome to guest Carla Laureano! She is sharing five reasons why the third novel of The MacDonald Family Trilogy was worth waiting for plus a giveaway opportunity for commenters! 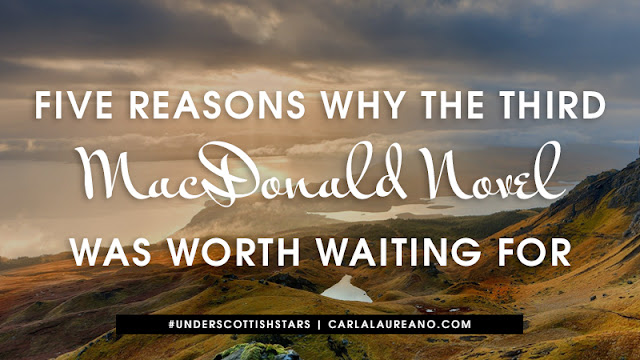 Publishing isn’t a smooth process on the best of days but rarely does a book go through as many changes and delays as Under Scottish Stars, the final book in my MacDonald Family Trilogy. It was initially scheduled to be released in June 2016, but the original publisher was in the process of closing down its fiction line. At the same time, I signed a contract with Tyndale House, who saw the opportunity to bring the entire series over and release the book themselves.

That came with an entirely new set of challenges, from repackaging and re-releasing the first two books in the series to redesigning covers and interiors, a multiyear process. But at long last, Under Scottish Stars has made it into readers’ hands, a full four years after its initial intended release. Which begs the question: was it worth the wait?

You might guess that I’m biased, so of course I’m going to say yes. But I can say that this is my favorite of the three MacDonald Family books, and there are five reasons it may be a contender for readers’ favorite as well.

1. Malcolm Blake gives James MacDonald a run for his money in the hero department.

James MacDonald from Five Days in Skye seems to be a perennial hero favorite among my readers, and really, I can’t blame them. James is handsome, charming, rich, can cook like nobody’s business, and he’s a celebrity. But for those who like their book boyfriends a little more down-to-earth (but no less sexy), Malcolm fits the bill. His roots are humbler and his wardrobe far less flashy, but he’s intelligent, caring, and secretly a little nerdy. Oh, and did I mention he’s a boxer? Case closed. 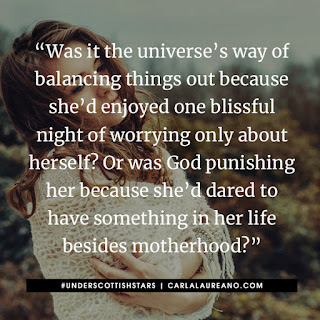 2. Serena MacDonald Stewart is a heroine we can all relate to.

We can’t all be high-powered businesswomen like Andrea from Five Days in Skye or globetrotting photojournalists like Grace in London Tides, but we can probably all relate to Serena: single mum and unintentional collector of many bad dates. She’s just trying to get over the trauma of a not-so-great marriage that ended in tragedy, raise well-adjusted kids, and do right by the family business. If that means her own wants and desires, including her passion for art, fall by the wayside, so be it. (Sound like anyone you know?)

3. We finally get closure on what happens to the other characters in the series.

When I write a series, I’ve been asked why I don’t write epilogues to the earlier books, and that’s because the stories of the first couples always carry through to the last book. Wonder what happened to James and Andrea after they said “I do” in book two? Wonder if Grace and Ian were ever able to overcome their bicontinental lifestyle and rocky beginnings? Under Scottish Stars addresses all that and more along the way, with a really sweet epilogue that makes me feel satisfied that I’ve delivered everyone their happily-ever-afters. (Because come on, we all know there will be a happily ever after, we just don’t know how we’re going to get there . . . it’s the best part about romance novels.) 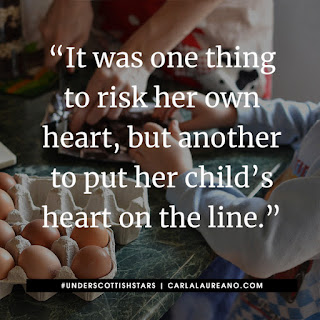 4. This book is an ode to the difficult, humbling, and worthwhile job of motherhood, especially single motherhood.

I don’t often read single-parent romances, and when I do, the kids are usually an afterthought. I wanted to do something completely different with Under Scottish Stars and give a realistic look into what it’s like to parent young children . . . and what it would be like to consider bringing a new man into their lives, with all of the worry and responsibility that entails. Single non-parents need not worry—there’s plenty of toe-tingling romance present . . . because motherhood doesn’t mean an end to romance. There is nothing more attractive than seeing your partner become a good father.

5. Even after five years, I still get weekly (sometimes angry) messages asking about this book’s release.

Not joking. Since London Tides, I’ve answered weekly messages about the expected release of this book and have been accused of everything from holding it back to be cruel to holding it back to make more money. (I still haven’t figured out how that last one works.) But honestly . . . if the love of the first two books has endured long enough to still generate that much anticipation and angst, you can’t not read it. Right?

All kidding aside, I’m thrilled to finally get the third MacDonald book into the hands of readers, and I hope they love it as much as I do. It’s a little bit nerve-wracking to release a book that is as highly anticipated as this book has been, because once it’s released to the world, it no longer belongs to me. If nothing else, the release of this book five years after it was written shows the full breadth of perseverance and determination that’s required by publishing. I’m just happy to have both industry partners and readers who were willing to go along for the ride.

Let us know if you're one of the many fans eagerly anticipating the final book of The MacDonald Family Trilogy! One fortunate commenter will win a copy of Under Scottish Stars! (US only)

Carla Laureano is the two-time RITA Award–winning author of Five Days in Skye, London Tides, and the Saturday Night Supper Club series. She is also the author of the Celtic fantasy series The Song of Seare (as C. E. Laureano).

A graduate of Pepperdine University, she worked as a sales and marketing executive for nearly a decade before leaving corporate life behind to write fiction full-time. She currently lives in Denver with her husband and two sons.