Two distinct sets of villains. Two orphaned children. A man without a country and a woman with too much past. And a rambunctious young country where anything went, especially in the West. What could possibly go wrong?

When I began drafting “Redemption’s Hope,” the third book in my “Western Dreams” series, I knew it had to be different from the first two. “Westward Hope” and “Settler’s Hope” were traditional romances, with a “him” and a “her” battling forces that would keep them apart. While the first book takes place on the Oregon Trail, the external conflict comes from how the hero and heroine respond to the challenges of the trail and how their relationship plays out against it. It’s still the Oregon Trail, but it’s all about them. The second book, “Settler’s Hope,” takes place in one small Oregon Country settlement, a raw hamlet the Irish-immigrant heroine isn’t all sure she wants to make her home. Still the Oregon Country, but all about her. 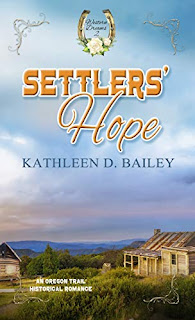 But I knew a one-horse town or even a wagon train tour wouldn’t offer enough scope for my third book, the story of Jenny Thatcher. Gun-toting, swaggering, pants-wearing, horse-stealing but now God-serving Jenny. A girl who was larger than life even in someone else’s book. And her love interest White Bear, a Native man who didn’t feel at home in either world, his or hers, and was larger than life in his own way.

They had been apart for three years, so the story had to involve a search for each other.  And cruel forces to keep them apart.

Jenny and White Bear needed a bigger stage for their story to play out from. I found it in the epic format.

Jenny and White Bear would roam what was then the known world, from Taos to San Antonio to New Orleans to St. Joseph, and through places that didn’t yet have names. They would come together briefly for three glorious days in New Orleans, then be separated by the powers of evil. (See above, two sets of villains!) They would spend the remainder of the book trying to get back together, until a final showdown on the snow-covered plain where it all started three years before. And they would do it with a slew of secondary and minor characters, some real historical figures, some that should have been.

Here’s how I made it work.

1.     While I often write my books piecemeal, doing scenes as they occur to me and patching the whole thing together like a quilt, I knew that wouldn’t work for “Redemption’s Hope.” Too many moving pieces, too much risk of losing one or several threads. So I wrote this one in linear fashion. I made notes for things I might want to include in subsequent chapters, but the general progression was chapter by chapter.

2.    Details do matter, and in the big book it’s more than just mistaking hazel eyes for blue. With two separate sets of villains, I had to distinguish them not only from each other, but from the other set of bad guys.  I stressed their physical appearance, and also gave one of Jenny’s pursuers an extra interest in abusing her sexually. It never happens, I wouldn’t do that to Jenny, but it gave her pursuers another level of complexity, and gave her one more thing to fear.

3.    I also had to pay attention to timelines, both real and fictional. I printed out a couple of lists of events in my period, 1849 and 1850, and sprinkled them liberally through the novel.

4.    I really wanted a couple of real historical characters, and I settled on Christopher “Kit” Carson and Mrs. Susannah Dickinson, the wife of Alamo hero Almaron Dickinson. I researched both heavily until I knew what they might have said to Jenny. But every word and interaction has to move the story forward, even in an epic. I had to not only have them do cameos, but to interact with Jenny in a meaningful way. Carson helps her escape from two killers who’ve tracked her to Taos. Mrs. Dickinson’s influence isn’t so dramatic, but in chatting with Jenny, she influences Jenny to wonder if she would be as brave as Mrs. Dickinson, and stay with White Bear through something like the Alamo. Modern writers don’t have the luxury of a Charles Dickens, or even the 20th-century’s James Michener. Everything has to count in some way.

5.    I also wanted to show the entire scope of the West at the time, so I threw in some fictional characters such as Jenny’s friend Noonday Smith, the would-be gold miner. The same rule went for these as it did for the real characters: they needed to interact with Jenny and her situation, and not just be window dressing. I’ve been fascinated for years – and appalled – by the Creole custom of powerful men taking on “quadroons,” pretty mixed-race women, as mistresses. The process was institutionalized, sanitized and sanctioned in 19th-century New Orleans. I wanted to have Jenny meet a quadroon, and found it in Dominique. But Dominique had to be more than an interesting sidetrack. I found her purpose in having Jenny reflect on her own past as a saloon girl, and fear exposing that part of her life again. She wants Dominique to find God, so she tells her own story as she explains the plan of salvation. It gives insight into Dominique—and Jenny.

6.    At some point I also had to decide what to leave out, and that’s hard with something as vast as the West. The American West was not only physically big, but had a range of characters and potential experiences. As my word count crept up and my characters careened toward their final battle, I knew I couldn’t fit in a cattle drive or a barroom brawl. But that’s all right. There are other Western books to be written, and I can put my stamp on those two classics in another story.

8.    For my epic, I also had to break with the conventions of the romance novel. White Bear and Jenny don’t meet or reunite in the first chapter, because the body of the story is about their search for each other. So I had to establish early on who White Bear was to Jenny, who Jenny was to White Bear, and that they had never forgotten each other. And I had to ramp up the anticipation of their reunion. Flashbacks are a powerful tool. Don’t overuse.

9.    Most of all, I needed to make their quest matter, especially for Jenny. Jenny, my former saloon girl, so tough on the outside, but hurting on the inside, so deeply even she doesn’t realize it. Jenny has accepted the Lord as her Savior, gone her way and sinned no more. But she still bears the load of guilt from all the years she didn’t serve Him. She buries her past in hard work at her horse farm and good times with her friends. But when she finally breaks away to look for White Bear, she also breaks away from the conventions that were holding her guilt at bay. As she roams the West she comes face to face with what she was, who she is now, and the full scope of the Father’s redeeming love. I had to make the journey matter for White Bear too, as he learns that Jenny is strong enough, and then some, to be married to a Native man. They needed to find not only each other, but themselves. 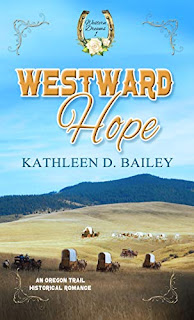 This is what needs to happen in an epic. I could have just concentrated on the plot, the twists and turns, mixing suspense with a travelogue and tying it up with a big bow of narrow escapes for its paper-doll characters. Some writers have done that. Some readers don’t mind. But Jenny and White Bear deserved more: an internal journey to match their external one. I hope I gave it to them.

Now it’s your turn. What do you like/dislike about the epic form? Writers, how do you make it work, or why don’t you write them? Readers, do you enjoy reading epics?

Kathy is generously offering giveaways today to three commenters! Let us know in the comments if you’d like to be entered for either a paper copy of "Westward Hope," an e-copy of "Settler's Hope," or a New England gift pack. 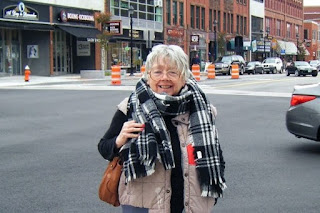 Kathleen Bailey is a journalist and novelist with 40 years’ experience in the nonfiction, newspaper and inspirational fields. Born in 1951, she was a child in the 50s, a teen in the 60s, a young adult in the 70s and a young mom in the 80s. It’s been a turbulent, colorful time to grow up, and she’s enjoyed every minute of it and written about most of it.

Bailey’s work includes both historical and contemporary fiction, with an underlying thread of men and women finding their way home, to Christ and each other. Her first Pelican book, ‘‘Westward Hope,” was published in September 2019. This was followed by a novella, “The Logger’s Christmas Bride,” in December 2019. Her second full-length novel, “Settler’s Hope,” was released July 17, 2020. She has a Christmas novella, “The Widow’s Christmas Miracle,” scheduled for this December as part of Pelican’s “Christmas Extravaganza,” and is completing “Redemption’s Hope,” the third and final book in the Western Dreams series.

She lives in New Hampshire with her husband David. They have two grown daughters.