When the Stew Badgers the Cook, It's Time to Write

Audra here. Fantasy books wear many hats. Rabbit holes leading to wonderland; Yellow brick roads; Board games sucking players into the  other dimensions. Endless plots filled with fantastic possibilities - Roulf Burrell offers it all by the bucketfuls. Enjoy the adventures of an array of unforgettable characters and share the experience with your friends.

How you write a fantasy novel is a bit like how you cook up your favorite stew. You prepare and add all your best ingredients. You get out the beans, your favorite meats, and stir it up properly. With fantasy, you set up a world, add mythical characters, splash in some magic and mix it into a respectable three act structure. After it simmers under the heat of tension, you get a delightful word-meal that tantalizes the imagination. The rewarding end to a good recipe.

But why do you write a fantasy? That is quite a different question entirely. Imagine you open the cupboard and a bag of beans steps forward, hops down onto the counter and insists you prepare a pan of water so they can relax in the pool and begin to soften. You open the icebox door and find the leftover ham, still clinging to the bone, arguing with the hamburger as to who makes better stew. They both turned to you, insist you include them, exclude the other meat, and put the light out. The salt is claiming to be de-iodized kosher and refusing to mix if the ham is allowed. The bay leaf, who is running from the Food and Drug Administration, will only stay if the meal is Keto compliant. And the canned tomatoes are indeed stewed, ala the Smirnoff bottle on the shelf next to them. You collect the whole complaining lot, deciding for your own sanity you'll turn them all into stew–and quickly fire up the pot.

This absurd illustration strikes close to the mark as to why I wrote my fantasy, Riddley Bundleforth and the Banshee Bell. Some of these pesky mythological creatures whipped up in my mind wouldn't leave me alone. They demanded a story. 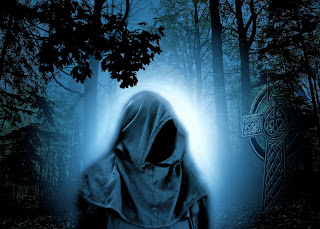 The female banshees kept arguing with each other. I assumed male banshees existed, but the females definitely screamed about that. I am the author, so I insisted one male must hang around to continue the species. The females, or 'shees as I call them, quickly made his life as harsh and nasty as their faces. By the way, they informed me they take great satisfaction in their gruesome visage.

It turns out this lone, unlucky male carries with him the entire potential from the other males. This allowed those males to flee life with the female ‘shees, which they were zealous to do. So the ‘shees take out their frustrations on him and accidently crack the castle bell.

The castle blacksmith should've been quite happy at her forge; a bell to fix. Being half ogre, she has tremendous strength, a natural bent towards working with metal, and thicker skin that is troubled less by hot sparks and flame. So imagine my irritation when she began to complain to me that she wanted a suitable husband. I saw she had too much ogre to suit most men, but not enough ogre to survive an encounter with males of that nasty species. I wanted to be an author. Now I'm a matchmaker for every discontented, half-monster, iron monger waving a hammer?

My vain little Fairy Queen took it as an insult if "the wrong sort of creature" copied her gown,
or crown, or anything else about her. Of course, some evil gremlins found this out and did exactly that. Being both a royal queen and a gentle fairy, she promptly declared war. 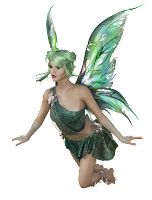 Then my leprechaun started whining because his pot at the end of the rainbow didn't have any gold in it. And this is my fault, how? Because I put him in this castle teaching and making magical candles. He was supposed to be filching dwarven coins and taunting dragons for their jewels. Well, pardon me, Mr. Lucky Charms.

The headmaster interrupts to tell me that the frost giants who cool the palace are feuding with the fire sprites who heat it. They all want more gold, but nobody at my castle has any. Who ever heard of the air conditioning system not getting along with the furnace? Does your washer and dryer fight over whether they get paid or when they are serviced? Of course not. Even as I shoo the headmaster away, a tiny four-legged step stool kept running back and forth, insisting on retaining the services of a carpenter.

Only one solution—throw them all out of my head and onto some paper. I could create a proper world to live in, which might allow me more serious writings, like Gone with the Killed Mockingbird or Gatsby's Great Expectations. A book befitting an author of my abilities.

But something stopped me. My conscience. It didn't seem fair to leave all of them there struggling with their issues when, with a few taps on my keyboard, I could provide some badly needed resolutions. If I took care and skill, I might produce an entertaining story for the folks in my life. For you see, I also imagined these mythical types could help each other! That’s a lesson which my own world needs! 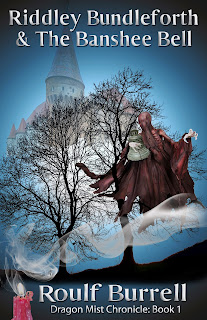 So it's with a small amount of pride, but a tremendous amount of mental relief, that I offer up my maiden effort in the fantasy genre. It's a genteel fantasy, full of curiosities, belief, and light. Reminiscent of the Chronicles of Narnia in its tone, and Diana Wynne Jones in its style. I hope you’ll give it a read—though I am not responsible if the characters start pestering you as you nod off at nights.

Hey Everyone! Audra here again. To celebrate his debut book, Roulf is offering an ebook of Riddley Bundleforth & The Banshee Bell. Leave a comment and you'll be included in the drawing. Check the Weekend Edition on Saturday! 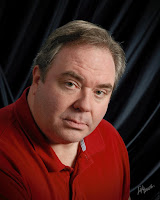 Roulf Burrell was an information manager for a quasi-municipal, raw water acquisition and transfer agency (read faceless government bureaucrat) for 25 years before early retirement. Having quit the government, he dropped the “bureaucrat” and rented a face (the picture is the best one he could afford.) Determined to write the kinds of books that had offered him a respite during his troubled teenage years (a time that lasted until he was 50,) Roulf started Riddley Bundleforth & The Banshee Bell.  He is now working on the sequel, Riddley Bundleforth & The Hag Rider.