Before I begin, a caveat - I can't say GMC by Deb Dixon is one of my favorite craft books (for reasons which I will explain), but there's no doubt it's an important and beneficial one. 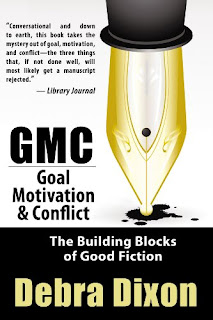 You see in many ways I could be that cautionary tale veteran writers could use to terrify newbies. Once upon a time, a long, long time ago, when I first began to write, I had no idea that there was such a thing as structure or that stories followed any prescribed formula.

I should amend that comment. I was not consciously aware of it. But because I was an avid reader, and had been for my entire life, I had a somewhat intuitive sense of story structure even if I didn't know that's what it was. 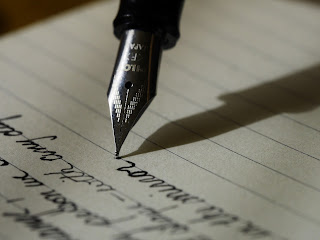 So, picture my happily writing away without a care in the real world, lost in my own wonderful story world. But then I took a break from writing for a while - children, work, grad school, there just weren't enough hours in the day to make it all work, and writing took the back seat.

No, seriously, the reason I'm explaining that is because I so very clearly remember coming back from my self-imposed writing exile to attend a writer's conference. And I remember being confused because of all the buzzwords I was hearing - and the buzzword that was on everyone's lips was GMC.

GMC. I had no idea what they were talking about. It was like everyone else was speaking a different language.

Finally, some kind soul clued me in to Debra Dixon's book (which had been published while I was off on writing hiatus).

I read it. I saw it's value (which it clearly had since everyone was talking about it!), and I ignored it.

I didn't want to write conflict.

I didn't want to make them be mad at each other.

Are you laughing at me yet?

I'm going to use a photo of the back cover, because I think this shows why the book is so important. 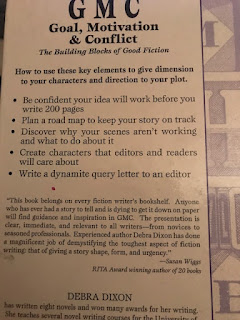 If you're interested in looking more into it. check out some of these posts:

Missy had one in the Archives - Battling Through Your Manuscript...Once Scene at a Time

(Note: Missy really gave a detailed explanation of how she uses a GMC chart.)

Then there are all these GMC posts in the Seekerville archives!

So tell me, are you a GMC chart maker? How do you handle planning the goals motivations and conflict for your characters.