It's the end of July, and I've spent the last three weeks in Maine, so it seems only appropriate that I choose a book written by an author from my new home state as this month's favorite craft book.

Ask writers to list their top ten craft favorite books on writing and inevitably their lists will include Stephen King's On Writing. 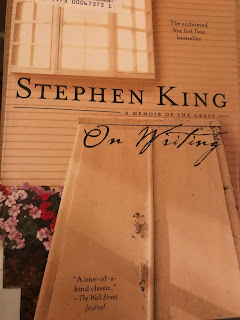 I first read On Writing in the early 2000s, shortly after it was released. I remembered really enjoying the book. I'd never read Stephen King before - not a fan of the horror genre - but I was immediately impressed with his storytelling ability.
As I prepared to write this post, I borrowed a copy from the library because my old copy was unavailable due to being in the middle of a move. I have to admit, although I remembered liking it a lot, I had no idea what it was about (other than the obvious - writing), so when I began to look through it for a refresher, I immediately got caught up in reading it. The book begins with an irreverent look back at King's childhood which left me somewhat aghast but also hanging on every word. As I was rereading it  I was struck by similarities to Roald Dahl's Boy: Tales of Childhood. Both books really make you see just how the experiences of their early lives fueled their imaginations and provided fodder for their stories.
Because I'm A) in the midst of a move, and B) helping my daughter who just got out of the hospital, I didn't have time to finish rereading the book, so August's post will go more into the actual writing advice part.
In the meantime, I'll leave you with some photos of Maine, the state that inspired much of King's writing.  It's rained almost every day of the three plus weeks I've been here, and when it wasn't raining, the fog settled it. But I love this kind of weather, so I'm happy.

We have had some bursts of sun, and Fenway seems happy with his new home. 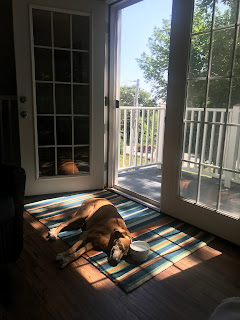 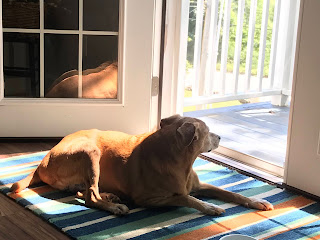 My daughter and I recently "hiked" up the mountain (in our car). This was the view from the top. 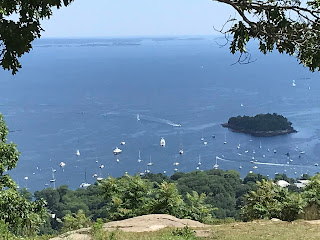 The harbor is gorgeous on a sunny day... 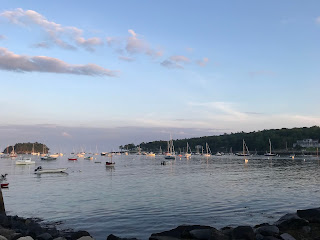 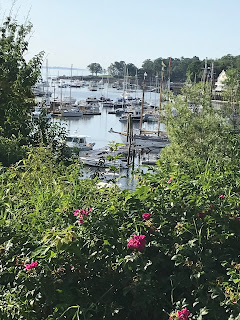 There has been so much rain, that toadstool villages have emerged! 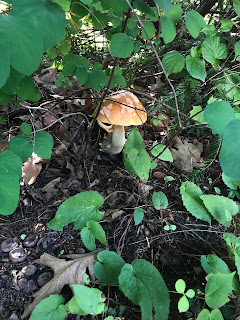 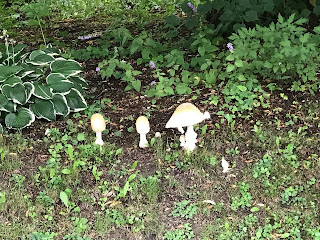 The webs spun by grass spiders have totally intrigued me. If I was a children's book author, I'd just have to spin a tale of tiny creatures living under the toadstools and leaving sparkling webs on the dew-laden grass. 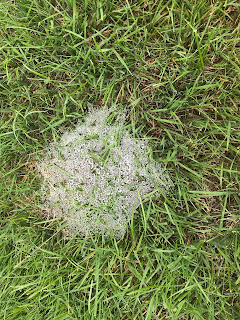 Good thing I love the foggy days because there have been a lot of them this summer. 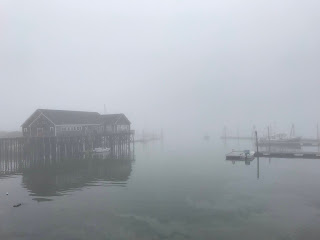 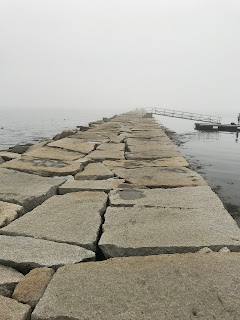 Somewhere at the end of the breakwater is the lighthouse. We could hear the foghorn, but the lighthouse wasn't visible, and if we turned and looked back toward shore, this was the view. 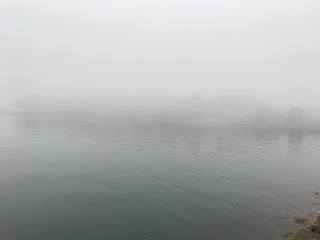 So back to writing, have you read On Writing? Does it top your list of favorites? We'll talk more about it in August, but please share your thoughts or tell me about how your summer has been going.