It's all about Perspective

Last summer I did two posts on writing-related words starting with the letter P.


Another "P" Word = Persistence posted back in August and A 15 letter word Not Equal to Lazy (Procrastination) in June.

One of my favorite quotes from the persistence post was this (referring to an article about why people don't meet their full potential) :


The trouble is that most people don’t seriously want what they say they want.

’I want’ means, ‘if I want it enough I will get it.’ Getting what you want means making the decisions you need to make to get what you want.”In other words, few of us are willing to do what it takes to achieve what we desire.

So why do I bring these old posts up today????

Well, because THIS happened last week. 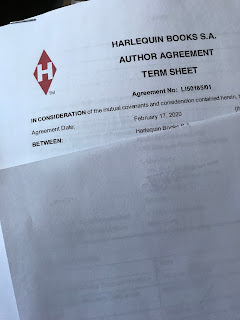 Despite my tendency to procrastinate, I persisted. I did the work and sold another book to Love Inspired Suspense. You can expect to see it on the shelf in January 2021.

I'm celebrating and I couldn't think of anyplace I'd rather announce it than here! 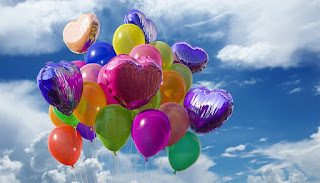 But as anyone who has ever sold a book knows, contracts come with lovely revision notes from your acquiring editor. I've been lucky so far, because neither of my books have required extensive revisions. However, the note that came this time made me think of a new P word, one that has been on my mind recently.

I had an experience that made me focus on PERSPECTIVE and how it relates to writing.

I have lived in the same neighborhood for the past 33 years. Nearly every day of those 33 years, I have walked down the block that is half a block over from mine. Most days I walk it multiple times - to and from work, walking the dog, going food shopping.

I live in a Brooklyn neighborhood that is known for it's Brownstones. Many of those houses have front stoops that end in pillars/pedestals. They look like some version of this. 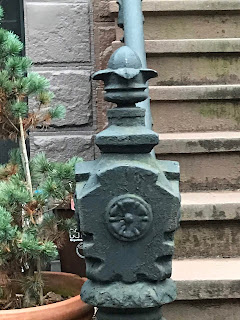 That is what I have seen every day for 33 years!

But a few weeks ago as I was walking down that very same street, I noticed something. If I looked at the stoop from a different angle, it looked like this. 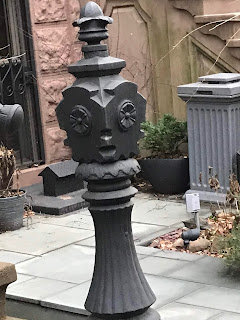 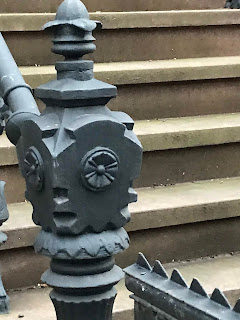 So I got to really looking, and then I noticed that this was true on many blocks. 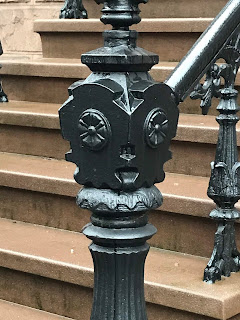 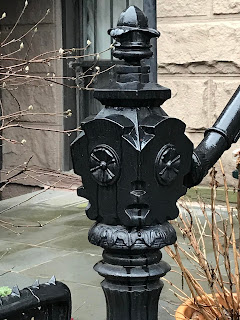 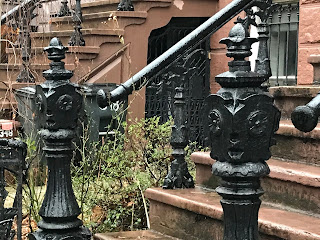 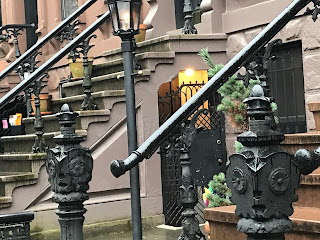 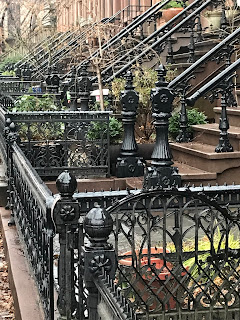 And most shocking of all - it was true of the pedestal at the bottom of the flight of stairs in my own house!

I had just never looked at it from that angle before.

So you may be asking, what is the connection to writing?

It goes back to that revision letter, and how sometimes, in order to see what our editor is seeing, we have to change our perspective. But that's not always an easy thing to do when you've been stuck in a rut thinking about something the same way for a long time.

(Fortunately, despite how it feels at times, I have NOT been working on this book for 33 years!)

In order to make the one change my editor requested, I had to change my perspective on why the heroine was acting the way she was. I did a lot of thinking about it, but then I did what I often do, I studied up on craft.

I read several articles on writing in an attempt to reconsider the changes I had to make. That's when I came across this video.

For those of you who don't have the patience to watch (though I highly recommend that you do), this short film called The Ten Meter Tower, this is the YouTube blurb:

A 10-meter diving tower. People who have never been up there before have to choose whether to jump or climb down. The situation in itself highlights a dilemma: to weigh the instinctive fear of taking the step out against the humiliation of having to climb down.


Most of the video is a closeup shot of people on the diving platform as they agonize whether or not to jump. It's by turns amusing, excruciating, and painful to watch.  (warning:  once or twice there is a curse word).

The viewer is left feeling SO curious about what the jump looks like. Eventually they pull away and show a long shot. I was going to post a photo of that, but I didn't want to violate copyright, so just imagine a long view of a pool (or go to 6:07 in the video).

The thing is, it didn't look so terrifying.

But then they showed a different view - the potential diver's view.


Suddenly you could understand why people were having such a difficult time deciding what to do.

And that spoke to the writer in me. We have to create that tension with our words. Switching the cameral angle proved just how critical that perspective can be. Sometimes, when we're deep into a scene, we don't remember to look at it from other angles. But doing that may make a huge difference!

In my case, it meant rearranging some chapters.

While I was waiting for my editor's letter, I did some cleaning up in my office and discovered a box that had copies of Christmas in Hiding. I'd like to give away a copy in celebration of my sale. Let me know in the comments if you'd like to be in the drawing!